A Handbook on Tobit and Judith

Tobit is a devout Jew living in Nineveh. He becomes blind after performing the good deed of burying a fellow Jew who had been executed. Later he sends his son Tobias with the angel Raphael to claim some money being held for him. Tobias does this, and returns home with a wife, a young woman who had once been plagued by a demon. Tobit regains his sight, and eventually dies with honor and dignity.

Some characteristics of the book of Tobit
Tobit is a charming narrative involving the private lives of two Israelite families living in exile far to the east of their homeland, in Assyria and Media. There is no real suspense in the story, since the author tells us early on just what is going to happen. But since the reader knows the course of the story in advance, the author can make use of irony to an extent that might not otherwise be possible. 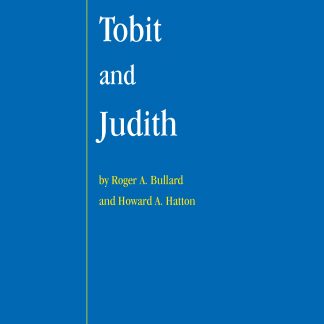 You're viewing: A Handbook on Tobit and Judith $30.00
Select options