A Handbook on 1-2 Esdras

Name of the book
Ancient Judaism produced a number of books that have been associated in some way with the biblical figure of Ezra. (“Esdras” is simply the Greek form of the Hebrew name “Ezra.”) The names given these books can be very confusing. The book with which we are concerned here is contained in the Apocrypha of Protestant Bibles, where it has been called 1 Esdras in English Bibles since 1560. It is not included in Catholic Bibles, but it is found in the Latin Vulgate, where it is known as 3 Esdras. Orthodox Christianity accepts the book as canonical Scripture, and calls it 1 Esdras. In editions of the Greek Old Testament known as the Septuagint, it is called 1 Esdras, and precedes what it calls “2 Esdras,” which consists of the canonical books of Ezra and Nehemiah, considered as one book. Turner (page 141) presents a chart of these books that is helpful if someone wishes to pursue this, as does Rowell (page 287 in Mercer Dictionary of the Bible).
1 Esdras is sometimes referred to as Greek Ezra, in an effort to be clear. This book has no connection whatever with the book called “2 Esdras” in the Apocrypha of Protestant Bibles.

Subject matter of the book
1 Esdras begins with an account of a Passover celebration held while Josiah was king of Judah (640–609 B.C.) and swiftly passes on to the fall of Jerusalem in 587 B.C. Passing over the time the Jews spent in exile in Babylonia, the history jumps to the decree that Cyrus of Persia issued in 539 B.C., allowing the exiled Jews to return to their homeland. We are very briefly told of the return, after which we are told of interference with the Jews’ attempt to rebuild their Temple during the reign of Artaxerxes I of Persia (465–424 B.C.). At this point the story jumps backward to the reign of Darius (521–486 B.C.), where we are told of a contest held by three of the emperor’s bodyguards, one of whom is the Jew Zerubbabel. Zerubbabel wins the contest, and Darius grants his wish that the Jews be allowed to return to their homeland. We are told of the return, andagain of opposition to the work of rebuilding the Temple. Darius verifies that his predecessor Cyrus had granted the Jews freedom to do this, and he allows the work to proceed.
Ezra appears in the narrative for the first time in 1 Esd 8.1, where his return to Judah along with another group of exiles is dated to the reign of Artaxerxes. At 8.25 the narrative shifts into the first person, as Ezra himself tells of his return from Babylonia and how he learned that many Jewish men had married non-Jewish women. At 8.91 the third person narrative resumes, telling of measures that were taken for these women, along with their children, to be separated from the Jewish community. The last scene in the book is that in which Ezra reads the Law of Moses publicly to a large assembly. While the reading of the Law is the last scene, it does not appear that the book ended there originally. The last sentence in the book is only a fragment and all scholars assume that additional material existed at one time. Some scholars also believe that the book is missing its original beginning as well. The beginning is not ungrammatical, but it is a bit abrupt. 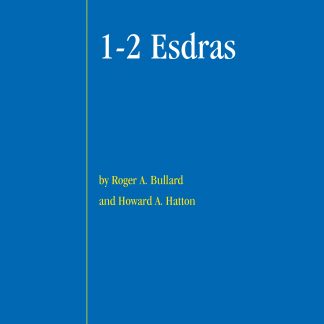