A Handbook on 1-2 Maccabees

A Handbook on 1-2 Maccabees is part of the UBS Handbook Series. Like other books in the series, this Handbook is a verse-by-verse commentary that concentrates on exegetical, historical, cultural, and linguistic problems related to the translation of 1-2 Maccabees. Even though the authors only address issues directly related to translation, many church leaders and interested Bible readers have found these Handbooks useful and informative

There are four books from Jewish antiquity that are known by the name“Maccabees.” These four books are from different authors and have no clear relationship to each other. The word Maccabees refers to a certain Jewish family of the second century B.C., particularly to Mattathias and his sons John, Simon, Judas, Eleazar, and Jonathan. Of these sons, Judas was the most important and best known. He was given the Aramaic name “Maccabeus” (meaning “the hammer” or “the hammerer”) for his successful military exploits. Technically, the name Maccabee applies only to Judas, but his family is often called the Maccabees. Properly
speaking, his family is known as the Hasmoneans. This name is not used in any of the four books known as Maccabees, but it is used in other reliable ancient sources. However, for practical purposes the terms Hasmoneans and Maccabees may be taken to be synonymous. Translators will not have to deal with either of them, except in the titles to the books.

The content and purpose of 1 Maccabees
1 Maccabees is a soberly told, straightforward history of political and military affairs in the Holy Land from 175 B.C. to about 104 B.C. It begins with the rise to power of Antiochus IV Epiphanes, king of Syria. Antiochus began a program to force the Jews to renounce their religion. One of the Jews, Mattathias, began a revolt against the king which his son Judas completed successfully. After Judas’ death, his brother Jonathan became the leader of the Jews and the High Priest. After Jonathan’s death, his brother Simon took over these offices. The book closes with Simon’s death and the succession of his son John Hyrcanus. The purpose of the book is to record and praise the heroic deeds of these Israelite leaders, who rescued the Jews from their persecutors and reestablished the independence of the Jewish people in their homeland. They are depicted as righteous men, acting under God’s guidance, although the writer places emphasis on their own abilities and accomplishments. God guides them, but the author does not attribute their success to miraculous divine interventions. 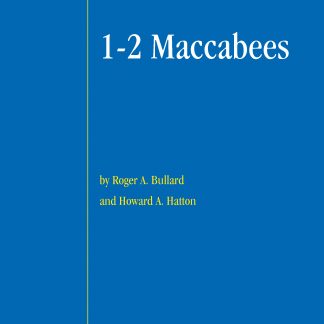