A Handbook on Sirach (Ecclesiasticus)

He wrote the book sometime between the years 196 and 175 B.C. The year 196 is the year of the death of the High Priest Simon II, who is praised at great length in chapter 50, which seems to have been written after Simon’s death. The year 175 marks the beginning of the time of troubles for Palestinian Judaism, beginning with the accession to the Seleucid throne of Antiochus IV Epiphanes, one of the great villains in Jewish history. All scholars agree that the author could hardly have written in or after those times without some mention of
current or recent events. Scholars tend to date the book between 190 and 180 B.C.

We know that the book was written in Hebrew, and translated into Greek by the author’s grandson. We do not know the grandson’s name, but we do know from the introduction he wrote to the book that he worked on the translation while in Egypt, beginning probably in the year 132 B.C. This was the thirtyeighth year of the reign of King Ptolemy VII Euergetes, the year the grandson gives for his arrival in Egypt. 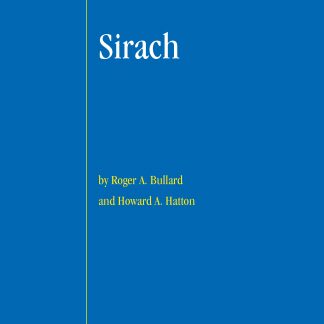