A Handbook on the Wisdom of Solomon

In its Latin translation, this book is titled simply “The Book of Wisdom,” and most Catholic sources call it by that name. In Greek, it is entitled “The Wisdom of Solomon,” and this title is usually used in Protestant versions of the Apocrypha. Either title is acceptable. It is almost universally agreed today that Greek is the original language of this book. There is less agreement about its date. Estimates are made from about 200 B.C. to about A.D. 50. Recent opinion seems to be moving toward a date at the late end of this time span.

King Solomon is never mentioned by name in the book, although it is clear from 9.7-12 that the author is writing as if he were King Solomon, at least in the central section, 6.22–11.1. (It is not clear that the author speaks as Solomon in the rest of the book.) The fact that the book is in Greek is reason enough to suppose Solomon himself is not the author, since Greece never developed a literature until several centuries after Solomon. Moreover, this particular style of Greek (200 B.C.–A.D. 50) is even later. At the time of writing, however, it was a common literary practice for authors to write books in the name of men of the past. This was no attempt at falsehood, but rather a tribute to the memory of those men. Today a writer might dedicate a book to the memory of a revered teacher. In those days a writer would write the book in the teacher’s name.

The author of The Wisdom of Solomon wishes to identify the book with the wisdom tradition of Israel, which is represented by Solomon in the same way as the legal tradition is represented by Moses. The author was certainly a Jewish scholar, very likely a resident of the city of Alexandria, in Egypt. Although he is familiar with Greek philosophy and has  been influenced by it, his primary concern is to make other Jews proud of their own faith, and to show its superiority over Gentile religions. 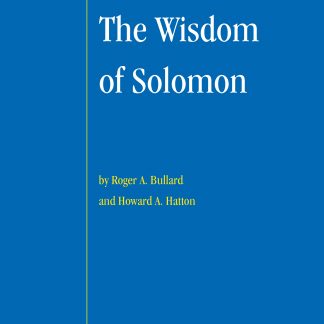