A Handbook on 3-4 Maccabees

Name and status of 3 Maccabees

The book known as 3 Maccabees, which was written and preserved in Greek, has nothing to do with the family of the Maccabees, whose story is told in 1-2 Maccabees. This story takes place about fifty years before the incidents in the history of the Maccabean family. Yet the theme of the book is very much like 2 Maccabees, and probably because of its similarity to this book it was placed in manuscripts directly after 2 Maccabees.

This book is not considered canonical scripture by Protestants or Roman Catholics, but it does have deuterocanonical status in the Orthodox Churches. Protestant practice is to group it among a large group of ancient non-canonical writings known as pseudepigrapha.

Author, date, and place of origin
The author of 3 Maccabees cannot be identified, but he was surely a highly educated Jew living in Alexandria, a large cosmopolitan city on the Mediterranean coast of Egypt. For a long time Alexandria had a large and active Jewish community, and the book was almost certainly written there. Scholars disagree about the date of the book. It seems to be familiar with the Greek version of Daniel, which is generally dated about 165 B.C., so it must be dated after that. The key passage for deciding the date is 3 Macc 2.27-30, which speaks of a registration of Jews. If the historical occasion reflected in that passage had a religious purpose, and pertained to Jewish persecution, the book is probably to be dated sometime while the Ptolemaic dynasty ruled in Egypt, which ended in 30 B.C. If, as many argue, the registration was to gather information for a poll tax, this would place the book in the Roman period; such a registration was conducted in 24 A.D. Rowell makes a strong case for composition during the
reign of the Roman emperor Caligula, 37–41 A.D. The exact date cannot be determined, but we may comfortably place it anywhere in the first century B.C.  or the first century A.D., without it affecting the translation of the book. 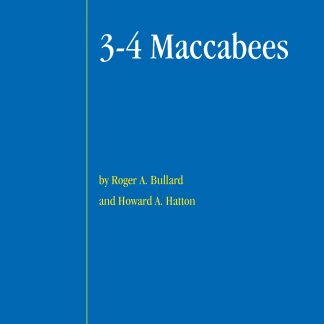