A Handbook on the Letter to the Hebrews

We do not know who wrote the Letter to the Hebrews, and we know nothing else that the author wrote. This means that we cannot, as in the case of Paul, use other letters to discover more about how the author thinks and writes. We have to rely mainly on the letter itself, which is rather short—less than one-seventh as long as Luke’s writings. The evidence of writings which seem to have a back¬ground similar to that of this letter can also be used to help us understand He¬brews, but this evidence is less direct and must be used with care. Scholars have seen simi¬larities to other parts of the New Testament, especially Stephen’s speech in Acts 7; also to the letter of Barnabas, written in the last quarter of the first century A.D.; and still more to the writings of Philo, the Greek-speaking Jew who lived from about 20 B.C. to about A.D. 50. Such similar¬ities, however, are lim¬ited. Stephen, for example, does not mention Jesus until the very end of his sermon (Acts 7.56)

Just as we do not know the name of the writer, so we do not know to whom he was writing. This is less of a problem for the translator than might at first appear. One of the major difficulties in translating 1–2 Corinthians, for example, is that Paul knew so much more than we do about his readers’ situation. Hebrews, by contrast, though written to a specific community, does not discuss the readers’ problems in great detail. It has even been suggested that Hebrews grew out of a collection of sermons preached to one group of Christians, and then sent to an¬other church with a concluding note. This would explain why Hebrews ends like a letter, but does not begin like one.

Hebrews, perhaps more than any other New Testament writing, is steeped in the Old Testament, which the author cited on the basis of the Septuagint, a Greek translation made some two hundred years before Christ. The author’s use of Old Testament texts and his method of argument owe much to the influence of Jewish rabbis.

One of the general translation problems which arises out of the writer’s Jewish background is his reluctance to use the name of God, even in Greek. For example, it is used in the first verse of the letter, but not again (except in quota¬tions from the Old Testament) until 2.4, although there are several verbs in the passage which have God as subject. In translation, it will often be necessary to insert the name “God” rather than using a pronoun such as “he,” which may not be clear.

The translator must be careful not to change the cultural setting; that is, he must not replace references to Jewish culture by features drawn from the translator’s own culture. If this is done on any large scale, the translator will find himself in serious difficulties. One apparently minor change (for example, the replacement of “shedding of blood” by “libation” in an African language) could involve more and more changes in a hopeless attempt at consistency. It is better to find the closest possible linguistic equivalent for the original cultural features, and then to give any necessary explanations in footnotes or a glossary.

Although the author was a Jewish Christian, it is clear that he had an excellent grasp of Greek language and style. This is one reason why Luther (Lu) and some modern commentators have thought he was the “eloquent speaker” Apollos (see Acts 18.24 28). It seems best to describe this writing as a letter, written to encourage a group of Christians to hold on to their faith under persecution. However, it is carefully planned and may have been originally given as one or more sermons. 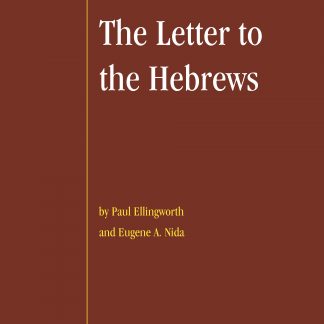