A Handbook on the Gospel of Matthew

This is particularly true in the way Matthew handles the Jewish Law. Take for example 5.17 18: “Think not that I have come the abolish the law and the prophets; I have come not to abolish them but to fulfill them. For truly, I say to you, till heaven and earth pass away, not an iota, not a dot, will pass from the law until all is accomplished.” Thus Matthew assumes that even the smallest letter and most minute detail of the Law is sacred. But for the Law to be fulfilled it must be transformed, and in the case of Matthew’s Gospel, transformation involves observing the Law even more strictly than the Jews supposed. In fact, excess is the mark of transformation. Thus it is not enough to be simply innocent of murder or adultery; one should not even contemplate these things. In the Sermon on the Mount, one finds over and over the statements “You have heard . .. but I say,” with an added admonition which has the effect of actually keeping the Law to excess.

Some phrases that will be very important to translators, then, include the one we have just listed above, “You have heard. . . but I say,” and also the continuing question, “How much more . . . .” Another phrase that relates to the theme is “All this took place to fulfill what the Lord had spoken by the Prophet.” These particular phrases constitute an important part of the structure of the Gospel. Also related to this will be certain words, in particular “fulfill” (1.22; 5.17), “law” (5.17), and “righteous” (3.15).

These expressions and terms are discussed at some length in this Handbook at their first occurrences in the Gospel. In addition to these, there are several other terms that we have found it necessary to discuss at length the first time they occur. These include “Son of Man” (8.20), “Kingdom of Heaven” (3.2), “Messi¬ah/Christ” (1.1), and “prophet” (1.22).

Another feature of the Gospel is the large number of references to the Old Testament. Some citations are fairly obvious, as where Matthew says “as the prophet wrote.” But in many other places he cites passages from the Old Testament without necessarily identifying them as citations. His readers would have recognized what they were, but often modern readers will not. We have taken note of this problem in this Handbook as well. 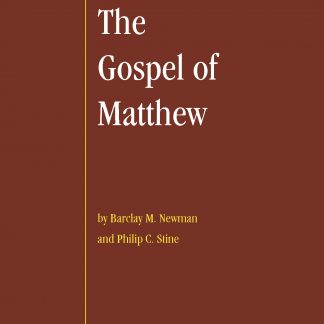