A Handbook on Paul’s First Letter to the Corinthians

In 1 and 2 Corinthians, Paul is writing to a church that he knew well. In many places he answers questions put to him by the Christians at Corinth, and tries to solve problems that have arisen in their church. Often he refers to people and events without giving many details of them. This sometimes creates problems for the translator.

For example, much of 1 Corinthians is concerned with what happened when the Christians at Corinth met together. It is important to realize that these activities included teaching, discussion, and even passing judgment, in addition to what modern Christians might describe as “worship.” No one term covers it all. Again, it is important (though difficult) to decide where Paul is speaking in his own name, and where he is referring to, or even quoting from, a letter he had received from Corinth. These and many other difficulties are discussed in detail in this Handbook; but sometimes we have to admit that no one today can be sure of the situation in Corinth at the time Paul wrote.

Two English translations of 1 Corinthians are printed in this Handbook: the Revised Standard Version (RSV) and Today’s English Version, second edition, 1992 (TEV). RSV is a rather literal translation, and therefore a good guide to the grammatical structure of the Greek text. For this reason it has been preferred to the rather less literal New Revised Standard Version (NRSV), which is often referred to. TEV is an accurate representation of the meaning of the text, and a useful example of how it may be restructured in translation.

This Handbook often refers to translations of 1 Corinthians in other, mainly European, languages. These are quoted in a rather literal English retranslation. Our purpose in doing this is not to suggest that European languages are in any way more developed, or translations in them better, than those in other parts of the world. We have used these translations in two main ways: first, to illustrate how different interpretations of the Greek text affect the translation; and second, to provide examples of how the meaning of the text has been expressed in particular translations.

References to other translations, whether in English or in other languages, should be understood as suggestions and possible helps, not as perfect models to be followed without question. The responsibility for finding the closest natural equivalent of the original text belongs to the translators. No transla¬tion in another language, no commentary, and no handbook can take this responsibility away. 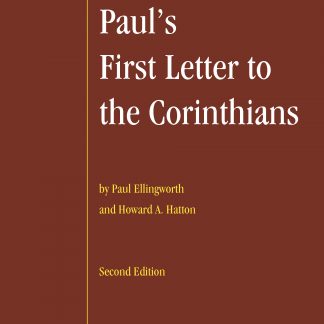