A Handbook on the Letter from James

The writer, who calls himself James, has traditionally been identified as James the brother of Jesus. That brother is mentioned by name in Mark 6.3; he is identified as the leader of the church in Jerusalem in Acts 12.17; 15.13; and 21.18; and he is described as “the Lord’s brother” in Gal 1.19. But there is no consensus among contemporary scholars as to who this James is. Furthermore, since the book’s contents are so general, and since it makes no reference to external events that would help us to date it, there is no agreement as to where and when it was written.

James addresses himself to the twelve tribes in the dispersion, which in the context of this letter is a figurative description of Christians scattered all over the world (so Today’s English Version [TEV] “all God’s people scattered over the whole world”).

Some vocabulary items
My brethren (or beloved brethren) is used fourteen times in the letter and often marks a transition to new subject matter (see 1.16, 19; 2.1, 5, 14; and elsewhere). In this letter the expression has an inclusive use, referring to both men and women, so it may be translated inclusively as, for example, “my brothers and sisters,” or “my fellow Christians.”

There are three occurrences of the word righteousness in this letter, and each one will need to be translated differently. (1) Righteousness of God (1.20) for James does not refer to God’s justice or goodness but is the standard that God sets for believers to follow, namely “the good things that he wants us to do” (Contemporary English Version [CEV]). We must not simply listen to God’s word but put it into practice (1.22). (2) The word righteousness in reckoned to him [Abraham] as righteousness (2.23) means that God accepted Abraham as a “righteous” or “good” person, meaning that he considered that Abraham had done the right thing and so was his friend. (3) Righteousness is also used in the clause harvest of righteousness is sown in peace (3.18). This means that the “harvest” or “fruit” of righteousness consists of peace. Righteousness here probably means “justice,” referring to using right and correct principles in dealing with other members of the community. This makes peace and harmony possible. Translators are urged to read the comments on the above verses carefully before deciding how to translate this term in each context. The related word righteous only occurs in the expression righteous man (5.6). It means an “innocent person.”

Grace is used only twice in the letter; both occasions are in 4.6. It probably refers to God’s “kindness,” so that the phrase “gives grace to the humble” means “shows kindness to those people who are not proud.” 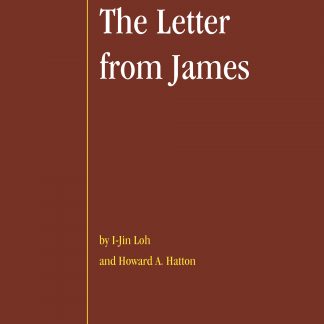