A Handbook on 2 Peter & Jude

The Second letter from Peter and The Letter from Jude have similar purposes. They are written to believers who are besieged by people who teach false doctrines among them.

The Second letter from Peter is addressed to Christians in general. The recipients are referred to as people “who have obtained a faith of equal standing with ours” (1.1). There is no other description found in the letter nor is there any mention of any geographical location.

From the letter itself it is clear that these Christians were troubled by the activities of teachers who “bring in destructive heresies” and who deny “the Master who bought them” (2.1). An example of the teaching of these false teachers is the denial of the second coming of Jesus Christ (chapter 3). The letter was therefore written to warn these Christians about the false teachers and to disprove some of their false doctrines.

Jude is also a general letter. The recipients of the letter are described as “those who have been called, beloved in God the Father and kept for Jesus Christ” (verse 1). Unlike 2 Peter, the deceivers are not exactly identified as false teachers but as “ungodly persons who pervert the grace of our God into licentiousness” (verse 4), who “defile the flesh,” and who “reject authority” (verse 8). They are grumblers and use flattery to get their own way (verse 16). As in 2 Peter, there is no geographical location found in JudeA particular feature of 2 Peter is that it is a testament, that is, a statement of some kind made by a person who expects to die soon. Parts of the Bible that may be classified under this type of literature are Deuteronomy (which is the farewell speech of Moses), Paul’s farewell speech to the Ephesians (Acts 20.17 38), and Jesus’ farewell speech in John 13–17. Translators will do well to pay attention to this in order to determine whether in fact there are similar types of literature in their own languages, and whether such types can influence their translation of this letter.
As to style, scholars have noticed that 2 Peter is characterized by long sentences and elaborate constructions. These are all attributed to Greek influences, which have also somewhat influenced the contents of the letter. But in contrast to 2 Peter, Jude seems to use simpler constructions, although not lacking in eloquence and in figurative language (see especially verses 12 13, where the figures of clouds, wind, fruitless trees, waves, and stars are used quite effectively to describe the state of the godless people). Translators will need to pay close attention to these stylistic features in order to treat them adequately in the translation task.
Like many of the other New Testament letters, these two letters contain many theological terms and expressions as well. Examples from the first chapter of 2 Peter are “righteousness of our God and Savior Jesus Christ” 1.1), “knowledge of God and of Jesus our Lord” (1.2), “divine power” (1.3), “called us to his own glory and excellence” (1.3), “become partakers of the divine nature” (1.4), “eternal kingdom of our Lord and Savior Jesus Christ” (1.11), and “the Majestic Glory” (1.17). The Handbook analyses these terms and suggests possible actors and goals where these are left implicit in the text. 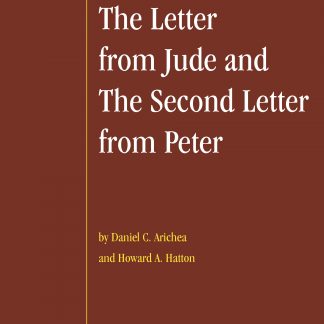