A Handbook on Paul’s Letter to the Romans

Doubtless Paul’s Letter to the Romans is the most widely read book of the New Testament, except for the Gospels themselves. In fact, if the apostle Paul had written nothing else, he would still be recognized as one of the outstanding Christian thinkers of all time on the basis of this letter alone. What gives Romans this appeal? Why is it so highly valued?

Above all else, the appeal of Romans is its theology, especially its statement of “how God puts men right with himself…through faith, from beginning to end” (1.17). This is the heart of the letter. Paul states this thesis in 1.17, and then develops his argument to show how all people, Jews and Gentiles alike, stand in need of being put right with God.

Paul first underscores the sinful condition of the non-Jewish world (1.18-32). He points out how its rebellion against God’s revelation of himself in nature and in the human conscience has led to terrible distortions of the natural order and to the worship of “what God has created instead of the Creator himself” (1.25). The result of this is the revelation of God’s wrath against “all the sin and evil of men whose evil ways prevent the truth from being known” (1.18).

The first part of the second chapter (2.1-16) speaks to both Jews and Gentiles. Paul has already demonstrated how the pagan corruption of life has brought down God’s wrath. Now in these verses he indicates that Jews and Gentiles alike, whether or not they have committed these moral abuses, stand guilty before God’s judgment: the self-righteous man, whether Jew or Gentile, will receive the same condemnation as the pagans described in 1.18-32.

In 2.17-3.20 Paul addresses himself directly to the Jews, indicating that the possession of the Law is of no advantage over the Gentiles, because “God trusted his message to the Jews” (3.2); but the Jews’ unfaithfulness made void any advantage that they may have had. So then, the only valid conclusion is that the Jews are in no better condition than the Gentiles: “Jews and Gentiles alike are all under the power of sin” (3.9).

Having shown how all men stand in need of fellowship with God, in 3.21-4.25 Paul turns again to the subject of how God puts sinful men right with himself. It is through faith, and “has nothing to do with law” (3.21), as the example of Abraham indicates (4.1-25).

Chapters 5-8, though introducing a new section in the letter, are also primarily theological. Each of these chapters emphasizes from different perspectives what it means to be put right with God. In 5.1-11 Paul shows how all the graces of the Christian life grow out of a right relation with God, while in the last half of the chapter (5.12-21) he contrasts the old humanity with the new humanity and the way of death with the way of life.

There is a parallelism between chapters 6 and 7: Romans 6 affirms that sin no longer has power over the believer, and chapter 7 illustrates how the Christian is set free from the power of the Law. Chapter 8 serves as the climax to all that Paul has said in chapters 5-7: it is God’s Spirit who enables the believer to conquer the power of sin (vv. 1-17) and to have hope in the glorious future that awaits God’s people (vv. 18-30). This chapter concludes with an expression of thanksgiving for God’s love in Christ Jesus (vv. 31-39).

For all else that Romans is, it is an intensely personal letter. It is not personal in the sense that Paul is addressing a congregation where he has served, but in other respects it is indeed personal. Paul begins by telling his readers that he has hoped to visit them on other requesting them to pray so that he may “enjoy a refreshing visit” with them (15.32). And chapter 16 contains a series of personal greetings to members of their congregation whom he has met during his travels.

Besides mentioning his plans to visit Rome and to go on from there to Spain, in this letter Paul gives us an insight into his own personal situation. Paul knows of the dangers that he faces from the unbeliever in Jerusalem, and of the possibility that his service for the Christian fellowship map not be accepted by the believers in Judea (15.31). Moreover, if the parallel between Romans 1.1,5 and Galatians 1.1,15 tells anything, there are intimations that the validity of Paul’s apostleship is being questioned by some. This accounts for the stress that he places on his apostolic call at the outset of the letter. Paul is deeply concerned that he be recognized as a genuine apostle, so that his message will be accepted by the Christians at Rome; otherwise his mission to them and to churches beyond will be impossible, or at least severely limited.

Finally, chapters 9-11 are deeply personal. One might classify them as theological or philosophical, for in them Paul discusses the mystery of God’s working in history, but essentially these chapters are personal. Paul himself is a Jew, and he loves his people. Why, then, have they failed to respond to the message about Jesus Christ? Is there any hope for them? Has God cast them off? Paul does not discuss this problem as an abstract issue, but as a matter that is of the utmost personal concern to him, and this is seen in the fact that at certain places in these chapters he is evidently more emotional than logical in his arguments.

Romans speaks as directly to the present generation as it did to the people of the first century A.D.; its evaluation of the human situation will be valid as long as men live in sinful rebellion against their Creator. And it will always have an appeal for men and women who are seeking to escape the power of sin and to be put right with God. In this regard, even the personal sections of this letter are important, because here we get a glimpse into the experiences of a man who was sinful like us, but who discovered the joy of the life of faith. 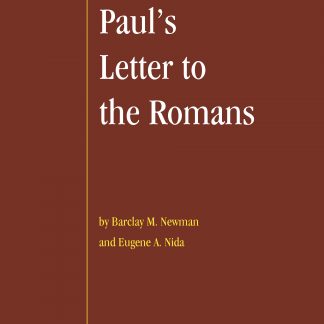