A Handbook on Paul’s Second Letter to the Corinthians

After his first visit to Corinth, when he established the church there, Paul wrote a letter that is now lost (1 Cor 5.9-13). Later the Corinthians wrote to Paul about many matters, and 1 Corinthians was written in part in response to those questions. At the time that he wrote it, he expected to visit Corinth later (16.3,5 6),

and promised to send Timothy to Corinth, with 1 Corinthians. Paul next made a second visit to Corinth, which turned out to be a painful visit, and he left with much tension between himself and the church there. Paul refers to this painful visit in 2 Cor 2.1. Rather than make another visit as he had planned (2 Cor 1.15–2.1), Paul wrote from Ephesus a forceful letter to Corinth, somewhat critical in tone, but filled with anguish and tears (2 Cor 2.4).

Paul then travelled from Ephesus to Troas (2 Cor 2.12); but because he was concerned about not meeting there with Titus, he continued on to Macedonia. There he met Titus, who was coming from Corinth with the good news that the Corinthians had had a change of heart in their relationship with Paul (2 Cor 7.5 13). 2 Corinthi¬ans was written following the good news of reconciliation that Titus brought. Paul apparently sent Titus back to Corinth, sending 2 Corinthians with him, with instructions for Titus to help the Corinthians finish raising money for the collection being taken among Paul’s Gentile churches for the Jewish Christians in Jerusalem (2 Cor 8.16 20).

Chapters 10–13 are very different in tone from chapters 1–9. In these final four chapters Paul writes a letter in which he defends himself and strongly attacks his opponents in Corinth. Using sarcasm and irony to defend his apostolic authority, he calls his opponents “super¬apostles” (2 Cor 11.5; 12.11), though in fact he considers them to be “false apostles” (2 Cor 11.13). It is possible that this part of the letter was written after receiving further news from Corinth that was more negative in character than that which Titus had brought.
2 Corinthians shows that Paul’s reputation in the Corinthian church was being damaged. This happened both because actions on his part were misunderstood, and because rivals were increasing their influence, as they compared themselves to Paul by sharply criticizing his apostleship. 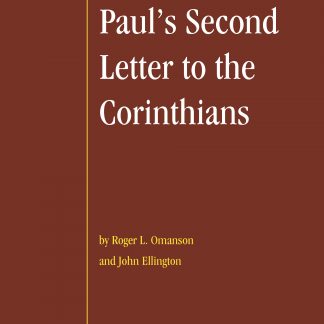