A Handbook on the Gospel of Mark

The Greek text has only ‘according to Mark’, but it has been traditional in most translations to expand this title to ‘The Good News according to Mark’ or ‘The Gospel according to Mark’ (or ‘Saint Mark’). In some publications designed especially for distribution to people who are not already familiar with the Scriptures, and to whom ‘the Good News according to Mark’ might mean little or nothing, there has been a tendency to employ certain supplementary titles which might be more attractive to the eye and to some extent indicative of the theme of the book. For example, in the Illustrated series, published by certain Bible Societies, this volume has been called ”The Field is the World,” with an appropriate picture of the Sower on the cover.

Even though for some particular publication a translator may wish to employ a supplementary title (this should be worked out in close consultation with the Bible Society), he must nevertheless solve the basic problem of the conventional title. The choice of the portion ‘the Good News’ or ‘the Gospel’ will depend of course on what expression is used in the first verse (see below), but there are two other problems: (I) the syntactic form of the title and (2) a title used with the name Mark.

In some languages an expression such as ‘Good News according to Mark’ would not be meaningful, since all such expressions must be complete sentences. This usually requires the addition of a verb, as for example, in the Tzeltal language of Mexico, where the title reads, ‘the Good News written by San Marcos’. (A verb of ‘writing’ or ‘reporting’ is usually adequate). Note, however, that in this Tzeltal form of the title the word San (Spanish ‘saint’) has been added. In many regions which have had some familiarity with Christendom Mark may be known only as ‘Saint Mark’, and to say anything less than this would be completely confusing, since the name of the person in question is a kind of fused title-name combination (something which happened historically in Spanish with Santo Jacobo ‘Saint James’, a phrase which ultimately became Santiago a single word). The employment of the title ‘saint’ is therefore not necessarily a matter of theologically dictated accretion but of employing a term already intimately associated with the name and without which not only would misunderstanding be likely to arise, but there might be a genuine feeling of offense to deep religious sentiments. 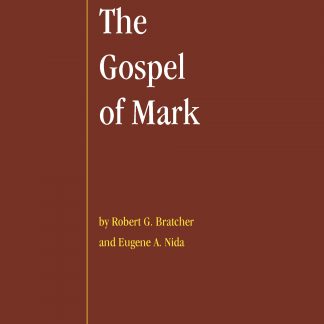