A Handbook on the Acts the Apostles

In comparison with certain other books of the New Testament, The Acts of the Apostles affords the translators several distinct advantages. In the first place, it is an exceptionally well-organized account, with clearly marked transitionals to mark the connections between events. In this respect the text of The Acts of the Apostles is quite different from some portions of the Gospels, where the connections between sections are not clearly indicated, and from some of the Epistles, which treat a number of matters for which background information is characteristically not supplied and hence the relationship between sections is frequently obscure. In fact, it is precisely the explicit lack of information shared by a writer and his audience which is a mark of the genuineness of a letter. Luke, however, addresses The Acts of the Apostles to persons whom he wants to instruct carefully in the important developments of early Christianity, and hence takes pains to show the relationship between episodes and sections.

The Acts of the Apostles presents another advantage to the translator in that it is primarily narrative in its structure, and therefore indicators of time and space are rather more precise than in most other types of writing. Of course, Acts also contains a number of discourses, but these are always carefully inserted into the narrative structure. One should not expect a book such as Acts to contain everything that happened in the early history of the church. Like any competent historian, Luke selects those particular events which are in keeping with his overall intent.

In contrast with the Synoptic Gospels (Matthew, Mark, and Luke), Acts does not confront the translator with the serious difficulty of representing accurately both the similarities and differences in the parallel passages. On the other hand, Acts does contain some parallel accounts of the same events, for example, Peter’s experience with Cornelius (10.9-33 and 11.4-18), and Paul’s conversion on the way to Damascus (9.1-19; 22.6-16; 26.12-18). Quite understandably, Acts avoids slavish repetition of identical words and phrases, but because of this there are some expressions which seem to be contradictory. It is not, however, a translator’s responsibility to attempt to eliminate these discrepancies of details. Rather, a conscientious translator will try to reproduce the text as Luke wrote it, leaving any seeming problems of difference to those who deal with such matters in commentaries.

Acts also affords the translator the advantage of containing sentences which are rarely ambiguous or oddly constructed. In contrast with some of the Pauline writings, in which the author was obviously so full of his subject that he scarcely seemed to know just how and when to bring a sentence to a normal grammatical end, and hence often shifted to another grammatical structure (thus producing what is generally called anacolutha), Acts contains for the most part carefully constructed sentences in which the syntactic relationship are usually quite evident. One should not, however, conclude that Acts is overly simple. Though the sentences are not especially long and though the relationships between the sentences are usually quite evident, nevertheless the structure of the discourse (that is, of the paragraphs and the larger sections) is quite subtly and intricately developed. The translator must, therefore, pay special attention to these elements in the structure of the narrative, and it is for this reason that this Handbook on Acts attempts to call attention to precisely these features of the larger structure. If, however, one is to appreciate fully the significance of these larger structures, it is essential to have some understanding and appreciation of the overall purpose and structure of Acts. 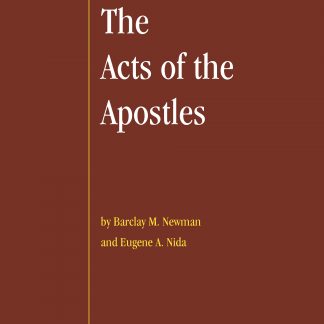