A Handbook on Paul’s Letters to Timothy and to Titus

The three short letters that are the subject of this Handbook are known as the Pastoral Letters, a designation that was first used in the 18th century. This name is appropriate for at least two reasons: (1) these letters were written by an older church leader (Paul) to younger church leaders (Timothy, Titus); and (2) these letters deal with various pastoral matters such as the qualifications of church leaders, the teaching of true and sound doctrines in the church, and the proper conduct of Christian leaders and of Christians in general.

Authorship and Date of Composition
Scholarly opinion is divided on whether the Pastoral Letters were written by the apostle Paul or by someone else, perhaps a disciple of the apostle who wanted to write with Paul’s authority. Most commentaries devote adequate space to the discussion of this matter. Whichever position is taken, the letters themselves state clearly that it was the apostle Paul who was speaking in these letters. There are, for example, details of Paul’s travels and situation. In 1 Timothy, Paul was on his way to Macedonia to see Timothy (1 Tim 1.3). In the letter to Titus it is assumed that Paul had been in Crete, where he left Titus to take charge of the work there (Titus 1.5). In 2 Timothy, Paul was in prison in Rome and was in fact anticipating his death, which was supposed to happen very soon (2 Tim 4.6 8).

This Handbook will simply refer to Paul as the author of these letters, following the tradition of the church. There is no clear scholarly consensus as to when these letters were written. The Muratorian Canon is a list of New Testament books, and it may have been written at the end of the second century; it was discovered by Muratori in 1740 A.D., and it includes these three letters in the list of letters written by Paul. This means that these three letters may already have been known to the Christian communities at least by the middle of the second century.

Recipients of the Letters
Timothy and Titus are well-known companions of Paul in his various missionary journeys and are mentioned in other parts of the New Testament. Timothy is first mentioned in Acts 16.1 3 as one of Paul’s companions during his second missionary journey. Timothy’s father was Gentile, while his mother Eunice was Jewish. Both his mother and grandmother (Lois) are mentioned in 2 Tim 1.5. It is very probable that it was Paul who led Timothy to faith in Jesus Christ; this would explain why Paul refers to him as “my beloved and faithful son in the Lord” (1 Cor 4.17) and as “my true son in the faith” (1 Tim 1.2). Timothy played a vital role in both Paul’s second and third missionary journeys, as the book of Acts clearly shows (see Acts 20.4 5). Paul also mentions Timothy as one of his companions during his imprisonment, perhaps in Rome (Col 1.1; Phil 1.1; Philemon 1), and commends him to the Philippians (Phil 2.19 23)

On the other hand, Titus is not mentioned at all in the book of Acts, although Paul mentions him prominently in his letters. This has led to the suggestion by some scholars that perhaps Titus is the same person as Silas, who is mentioned together with Timothy in the book of Acts (see Acts 17.14 15; 18.5). This suggestion is made more attractive by the fact that Titus is more frequently mentioned in Paul’s letters, and in the few places where Silas appears, he is mentioned together with Timothy, but Silas and Titus are never mentioned together (see, for example, 2 Cor 1.19; 1 Thes 1.1; 2 Thes 1.1). The first mention of Titus is in Gal 2.1 3, where Paul refers to him as an uncircumcised Gentile who accompanied Paul and Barnabas to Jerusalem to meet the leaders there. Later on we meet Titus again, when he plays a vital role in resolving the problem of the Corinthian Christian community (see, for example, 2 Cor 2.12 13; 7.5 16), and in following through the program of relief for the poor Christians in Jerusalem and Judea (2 Cor 8.6, 16 24; 12.18).

It has been suggested by some scholars that both Titus and Timothy are intended to represent younger leaders of the Christian community; the advice given to them is therefore intended for a much larger group of church leaders.

Paul instructs both Timothy and Titus to oppose these false teachings by means of sound teaching and proper Christian conduct. In addition he emphasizes their duties and responsibilities as leaders of the Christian community and especially as guardians of true Christian teaching.

In a Christian community troubled by false teachings, an organizational structure is needed in the church to expose false teachers and guarantee that the true teaching of the church is preserved and protected from corruption of any kind. That is the reason why in these letters there is emphasis on church organization and special church positions such as bishops, elders, and deacons. A great part of the duties of these officers is to make sure that sound doctrine is taught and firmly planted within the Christian community.

Special Characteristics of the Pastorals

There are certain features of the Pastorals that we need to be aware of in order to deal with them properly in the translation and interpretation task. Firstly, there are terms that are used in special ways, as for example the Greek words eusebeia (RSV “godliness,” “piety,” “religion”) and related words euseb_s, eusebe_, theosebeia; pistis (faith); hugiain_ and hugi_s (RSV “sound”) used to describe teaching and doctrine; and the expression pistos ho logos (RSV “this is a faithful saying”). Secondly, there are several parts of these letters that are poetic in form and content and therefore can be translated as poetry, if it is appropriate to do so in the receptor language. Examples of these poetic segments are 1 Tim 3.16 and 2 Tim 2.11 13. Thirdly, as already mentioned, there is a pattern of church organization that is reflected in these letters; this organizational structure assumes the existence of certain church positions such as bishops, elders, and deacons. Finally, as one might expect from a personal letter, the Pastorals reflect a close relationship between writer and recipient. For example, Paul addresses both Timothy and Titus as “my true son” (1 Tim 1.2; 2 Tim 1.2; Titus 1.4). The translator will do well to try capturing the emotive features that accompany such intimate relationships. 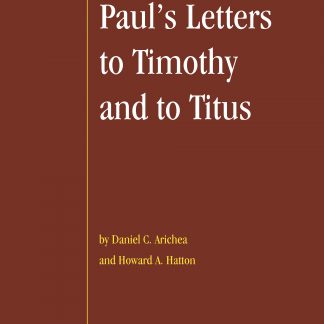