A Handbook on Ruth

The Book of Ruth has consistently been one of the most popular stories of the Old Testament. It is often the first book translated into so-called “new languages,” not only because the content of the story proves to be so interesting, but because the narrative develops in a relatively clear and easy manner. Furthermore, the Hebrew is not particularly difficult, and there are not many textual complications. Perhaps one of the reasons why the Book of Ruth is one of the first books to be dealt with by Old Testament translators is that it is one of the first books to be studied in classes in Hebrew.

Translating the Book of Ruth would be easier if we possessed certain clues as to the time when it was written, but there are no clear clues either in the content or in the forms of language which would indicate when this story was composed. The frequent repetition of the term “Moabitess” in connection with Ruth has led to the suggestion that perhaps this book was written in the time of Ezra and Nehemiah as a protest against the stern measures taken by these leaders against men who had married Moabite wives, but there is really nothing substantive either in the grammatical forms, the choice of vocabulary, or reference to historical events which can tell us precisely when this book was written. We do know, of course, that it was written after the time of David and probably several centuries after the time of “the judges,” for not only does the writer refer back to the time of the judges (1.1), but he explicitly refers to customs which were presumably followed in earlier times, but had been altered or abandoned by the time of the writing (4.7).

Not only do we lack clear evidence concerning the time of the writing of the Book of Ruth, but the purpose or purposes of this composition are likewise not evident. There are a number of significant themes, such as God’s ultimate faithfulness, loyalty between persons, and the importance of clan relations, especially in the act of redeeming one’s title to property. Since these various themes do have wide application, and since similar concepts and attitudes exist in many societies, the Book of Ruth has been greatly ap-preciated. It seems to speak so well to the needs and interests of people in many societies throughout the world. 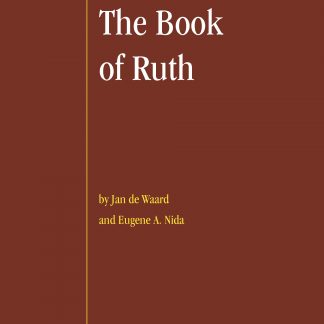