A Handbook on Esther

The Book of Esther is often called a “historical novel,” but interpreters differ in whether they emphasize the word “historical” or the word “novel.” Emphasis throughout the book is placed on a series of events that are presented within a historical framework. Although historians may question the historicity of the events in the Book of Esther, it is clear that the author uses the form of a historical account to tell the story of Esther. In the Hebrew version the reasons behind the actions of the characters are not developed any more than the characters themselves. The writer never tells, for example, why Queen Vashti refused to appear before the king. It is only said that she was “fair to behold.” Through his actions the king is shown to be wealthy and vain, but we are not told why Bigthan and Teresh plotted against him. Even Mordecai and Esther are presented more through their deeds than through description.

Various characters such as Vashti, Harbona, and others appear briefly in the story, but only four characters are central to the development of the story: King Xerxes, Mordecai, Esther, and Haman. Even they are given few personal descriptions and are only marked as heroes or villains as the author develops the story and moves it forward quickly from its beginning to its end. The Hebrew text of Esther has a distinctly secular flavor in that it contains no explicit reference to God. It does not even mention religious faith or prayer. Only one verse (4.14) may be understood as a direct allusion to God. There is a certain folktale quality about the story as the oppressed overcomes the oppressor.

The Greek text of Esther (the Septuagint, referred to as the LXX) does, however, have a strongly religious flavor. It makes frequent reference to God and clearly reveals Esther’s piety and devotion. It points out that the God whom she and Mordecai serve is the King over all things, the Lord of all, the God of Abraham, the living God. The opening account of Mordecai’s dream and its interpretation in the final Addition resemble apocalyptic literature similar to the books of Daniel and Revelation.#

The author of the Greek version sometimes tries to explain and clarify what is only alluded to in the Hebrew. For instance, the Greek version tells us that Vashti was summoned specifically to be crowned queen, and that Mordecai overheard the plotting against the king because he was an official serving in the court of the king. Some of the details in the Greek version lend a romantic touch to the story, as when Esther goes before the King (Addition D). The inclusion of the texts of two long official decrees is perhaps intended to provide additional evidence for the historicity of the account (Additions B and E).

Because this Handbook is intended for translators, the commentary focuses on exegetical issues and translation problems. Although manuscript tradition may be the source of certain translation problems, the authors have not taken it upon themselves to delve into this feature of the history of the Book of Esther. Instead, those elements that have been deemed important for the understanding of Esther and for interpreting the book for other cultures and other languages have been highlighted and discussed.
Extensive use is made of other translations, especially those in English, French, German, Brazilian Portuguese, Italian, and Spanish, to which the reader may have access. These are cited both to exemplify interpretations of the source text that may each have equal claim to giving the intended meaning, and to serve as translation models. Sometimes there may be no objective reason for recommending one particular interpretation as the best. Other translations are also cited to serve as possible translation models. However, the right translation
can be found only by determining what will be the best way to express the message when making use of the most appropriate resources of the receptor language. 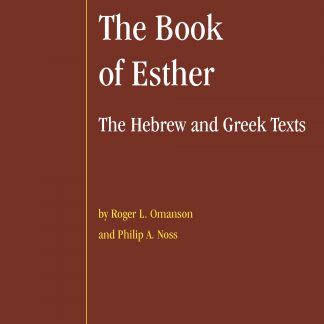