The ancient Greek version (called the Septuagint) divided the books that we know as 1-2 Samuel and 1-2 Kings into four parts under the title “Books of Kingdoms.” They were called 1, 2, 3 and 4 Kingdoms. Jerome, the translator of the Latin Vulgate, changed the titles to 1, 2, 3 and 4 Kings. The Hebrew tradition, on the other hand, continued to preserve the two books of 1-2 Kings as one book. Finally, however, under the influence of the Greek tradition, the printed Hebrew Bomberg Bible of A.D. 1517 divided the book of Kings into two books. Today, both Jews and Christians usually call these two books 1 Kings and 2 Kings. In Hebrew Bibles, 1-2 Kings are located in the second major
section, called The Prophets. Together with Joshua, Judges, and 1-2 Samuel, the books of 1-2 Kings comprise that section of the Prophets called the Former Prophets.

The English translation by Ronald Knox, which is based on the Latin Vulgate, follows the Vulgate tradition and gives the names of 3 Kings and 4 Kings to the books normally called 1 and 2 Kings. Knox names the books traditionally known as 1 Samuel and 2 Samuel “1 Kings” and “2 Kings.”

The books of 1-2 Kings are a continuation of the story of the people of Israel as told in the books of Joshua, Judges, and 1-2 Samuel. They describe the approximately four-hundred-year history of the northern and southern kingdoms of Israel and Judah from the last days of David in the tenth century
B.C. until the destruction of Jerusalem and the Babylonian Exile in 586 B.C. 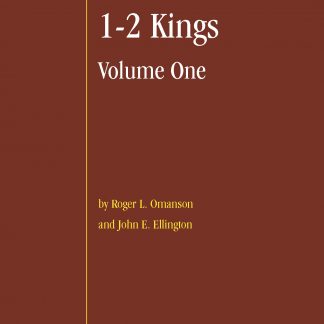