A Handbook on Song of Songs

Love songs in Scripture? The Song of Songs (or, Canticles), with its very human expression of love between a man and a woman, is located in the Writings section of the Hebrew Bible. Throughout the centuries there have been those who have found it difficult to accept that the Scriptures contain a book like this, for it does not mention God or any of the major Old Testament themes and concerns. However, the earliest lists of canonical writings available to us all contain Song of Songs. Rabbi Akiba, at the Council of Jamnia in A.D. 90, is reported to have described it as ‘‘. . . the Holy of Holies.’’ In Jewish tradition the Song of Songs has become the text appointed for reading on the Eighth Day of Passover.

Throughout the long history of the interpretation of Song of Songs, there has been a clear division between the allegorical and literalist interpretations. According to the allegorical view, the purpose of the book is to teach some truth. It does this by using indirect language, and pictures or images representing something else. The literalist, on the other hand, says that the words mean exactly what they seem to mean; each word has only its plain and obvious surface meaning. It is the allegorical view of this book that has enjoyed the widest acceptance both in Judaism and in Christianity.

Perhaps the major reason for the popularity of the allegorical view is the book’s apparent lack of religious significance. Some felt a book in the Bible had to have religious significance. Another factor seems to be the general embarrassment many believers feel when they find this kind of love song in the Scriptures. The Song does not conform to their view of what sacred Scripture should contain. Therefore they seek its ‘‘hidden’’ meaning, a meaning that they believe can only be uncovered by an allegorical treatment.

Jewish evidence going back to the seventh and eighth centuries shows that the common approach was to see in the Song a picture of God’s love for his bride, the people of Israel. Support for this, they argued, was found in Hosea, which speaks of Israel as God’s disobedient wife.

Christians have adopted much the same approach as the traditional Jewish view, linking Christ with his ‘‘bride,’’ the church. Beginning with Origen and continued by Gregory (sixth century) and Bede (eighth century), the church has demonstrated a variety of allegorical interpretations. There has also been a Roman Catholic suggestion that the young woman in the Song is the Virgin Mary. This view is not widely held.

The allegorical approach is still held by some today. Tournay, for example, sees the collection as a set of poems describing Israel’s longing for the Messianic ‘‘Solomon.’’ He claims the book was purposely written with double meanings.

Partly due to scholarly advances such as the discovery of similar material in Egypt, and to the fact that very few of the allegorical interpretations agree with one another, there has been a general move away from this approach. Today many scholars conclude that the Song is a serious collection of poems about human love.
Translators who wish to explore further the wide range of meanings and explanations that have been given to this text over the centuries, both from a Jewish and Christian viewpoint, can consult the extensive commentary by Marvin Pope. In this Handbook, however, we will not concern ourselves further with these issues, but rather examine the text as a love poem, with all the transla¬tion problems this can raise. Thus we leave aside questions of allegory or mystical meaning and leave this aspect of interpreta¬tion with the reader.

If we agree that the work is love poetry, we nevertheless cannot say that there are no other levels of meaning within the text. The Song is full of innuendo and double meaning. There are many subtleties of language, many references that draw their meaning from the culture of the author, and a great deal of figurative language. Thus the translator’s task is not an easy one. For this reason there will probably need to be a larger than average number of footnotes in a printed translation to clarify meaning. For example, when the lovesick young woman expresses longing for ‘‘raisins’’ and ‘‘apples’’ (2.5), the literal meaning may be easily conveyed, but the deeper signifi¬cance of the imagery may need to go into a footnote. Otherwise the modern reader will not be able to appreciate its possible sense in the same way as an original reader or hearer. 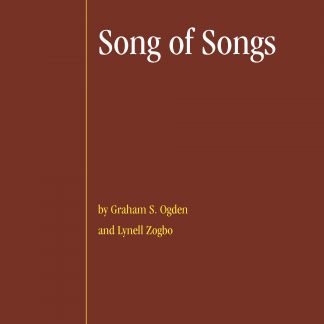