A Handbook on Paul’s Letter to the Ephesians

This letter affirms that it was written by Paul to the church in Ephesus while he was in prison (3.1; 4.1; 6.20); it was to be taken to the church by Tychicus (6.21 22). There are questions concerning the author and the recipients of the letter. As for the recipients, the words “in Ephesus” in 1.1 are missing in important early manuscripts a fact which makes it very probable that the original copy did not have the name of the place to which the letter was being sent. The lack of any personal greetings at the close of the letter is also strange, since the apostle Paul had begun the Christian work in Ephesus and had spent almost three years there (Acts 18.19 21; 19.1 20.1; 20.17 38). Furthermore, unlike other letters, this one does not have any specific references to problems or conditions in the church itself. All references are general, applying equally well to Christians in any Gentile community at that time.

Questions about the author of the letter arise because of the kind of relation between the writer and readers, as reflected in the letter itself. Twice Paul’s name appears (1.1; 3.1), and the reference to Tychicus (6.21 22) obviously implies that Paul is the one about whom the Ephesian Christians are anxious to hear. But the lack of personal greetings is especially noticeable when compared with the final greetings in the letter to the Colossians (4.17 18), a letter with which Ephesians has striking similarities. The writer refers to his knowledge of the readers of this letter in the following terms: “Ever since I heard of your faith in the Lord Jesus and of your love for all God’s people” (1.15). This is a strange way for Paul to speak of people with whom (or, at least, with some of whom) he had lived for nearly three years. The same relation is seen in the statement in 3.2: “Surely you have heard…”

From information in the letter itself, it appears to have been written at the same time and from the same place as the letter to the Colossians, as is seen by comparing Colossians 4.7 8 and Ephesians 6.21 22; in fact, Collosains 4.8 and Ephesians 6.22 are identical in Greek. The relation between the two letters is difficult to understand, and there are many possible explanations. One fact that emerges from a close study of the letters is that key words used in both of them do not have the same meaning in the two letters, which is hard to account for if both were written by the same person at the same place and time.

A translator has the option of excluding or including the words “in Ephesus” in 1.1 (see commentary) but does not have the option of excluding Paul’s name from 1.1 and 3.1. A translator will be helped by consulting commentaries and Bible dictionary articles on the subject of the authorship and destination of the letter before beginning to translate.
Ephesus was the capital city of the Roman province of Asia, located some 175 kilometers west of Colossae. It was an important commercial, cultural, and religious center, and its magnificent marble temple (see Acts 19.27) was considered one of the seven wonders of the ancient world.

The purpose of the letter is to proclaim God’s plan through Jesus Christ, which is to bring all creation together, everything in heaven and on earth, with Christ as head (1.10). This unity has already been achieved in the Church; here the new humanity already exists. Whereas the old humanity was composed of Jews and Gentiles, the new humanity is composed of all who through Christ have become the people of God (see especially 2.17 22). The oneness of God’s people is seen in the Church, which is the Body of Christ (1.23); it is the sacred Temple, in which God lives through the Holy Spirit (2.21 22); and it is the wife of Christ (5.25 32).

Those who through God’s grace have been saved (2.8 10) must live as God’s people. In the second half of the letter the writer exhorts his readers to live in such a way as to show that they are God’s children, loving one another as Christ loved them. As children of God they are expected to be like their Father, God himself (5.1). 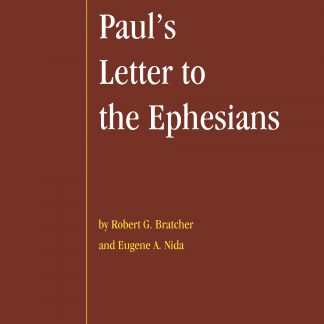