A Handbook on Paul’s Letters to the Thessalonians

Commentators are generally agreed that apart from greetings at the beginning of this letter, and the conclusion, the letter is divided into two parts. The first three chapters consist mainly of teaching based on the relationship between Paul and his fellow evangelists on the one hand, and the Christian in Thessalonica on the other hand. The second part consists mainly of exhortation or calls to action.

The dates at which Paul wrote his various letters are usually uncertain, and they are not very important for the translators. There is, however, good reason to believe that 1 and 2 Thessalonians, in that order, are the first two of Paul’s letters to survive. It is also fairly certain that 1 Thessalonians was written about fifteen years after Paul’s conversion, that is, early in the year 51 or late in the previous year. Paul was writing to young Christians, but he himself was already an experienced evangelist.

All of Paul’s letters follow the normal Greek pattern of stating at the beginning the name of the sender(s), the name of the person(s), to whom the letter is addressed, and a greeting. Paul, however, fills this conventional form with a new and Christian content. The introduction to this letter is the shortest we have in any of Paul’s letters to a church. Some early copyists, followed by the older translations, apparently found the ending of verse 1 too abrupt and so added“ . . . from God our Father and the Lord Jesus Christ” or a similar phrase (cf. 2 Thess. 1.1), but these words are probably not original here.

Three people are mentioned as senders of the letter: Paul, Silas, and Timothy. They had visited Thessalonica together, and they were together in Corinth while the letter was being written (see Acts 17.1-18.5). The repeated use of “we” in this letter, more frequently than in any other of Paul’s letters, shows that the message comes essentially from all three senders. Especially in the first three chapters, they refer continually to experiences they have lived through together. But there is no reason to think that either Silas or Timothy and much share in the actual writing of the letter. The sentence structure, vocabulary, and style are similar to those of Paul’s other letters, and in a few places (2.18;3.5;5.27) he speaks in his own name, using the first person singular. 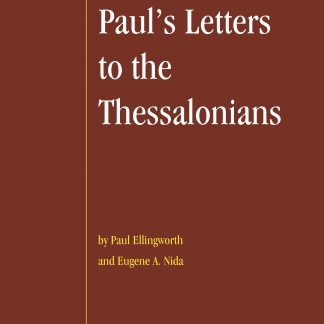