A Handbook on Obadiah, Jonah, Micah

This is the shortest book in the Old Testament. It has only one chapter and therefore references are made only to the verse numbers. The book is concerned mainly with the punishment of the people of Edom because of their treachery and cruelty to the people of Judah.

We know nothing certain about the writer. Obadiah was a common name in Old Testament times. It means “One who serves (or, worships) the Lord.” There are eleven other people in the Old Testament who bore this name, but there seems to be no reason to identify the writer of this prophecy with any of them.

The subject matter of the prophecy is the hostile behavior of the Edomites toward Judah, almost certainly at the time of the fall of Jerusalem to the Babylonians in 587 or 586 B.C. The book is therefore to be dated at some time after that event. It also speaks of the Edomites being driven out of their own country as though this is either already happening or about to happen. In fact, they were driven from their traditional homeland by invading Arab tribes in the first half of the fifth century (500–450 B.C.), and the book must therefore be dated no later than that. A number of modern commentators suggest a date around 500 B.C., and the translator does not need more precise information than this.

The book of Jonah contains one of the best-known stories in the Old Testament. Many people know of only one incident in the book—the fish swallowing Jonah—especially since that incident is singled out in the teaching of Jesus and reproduced in traditional Christian art.

But the reference in Matthew to Jonah’s three-day stay in the big fish is immediately followed by a reminder that the people of Nineveh repented when they heard Jonah’s message (Matt 12.40,41). The message of the book may be summed up as “What is likely to happen when people repent.” Two things happen, according to this book. In the first place, God responded to the repentance of the people of Nineveh by changing his mind and sparing them. In the second place, Jonah, who at first had been unwilling to give them an opportunity for repentance and had only preached to them because he was forced to, was highly annoyed.

So here among the “Minor Prophets” is a book about a prophet and his reaction to those who listened to him. It differs from all the other books in this section of the Old Testament, which contain God’s word to Israel and the nations through his prophets. Instead this book contains God’s word to a prophet through other people, all of whom are non-Israelites, but who are able to teach him something that he did not fully appreciate before about the God of Israel, who is “a loving and merciful God, always patient, always kind,” even to those least deserving of his grace, and even to a stubborn prophet.

Micah the prophet preached God’s word to the people of Judah seven hundred years before the time of Christ. Some years before Micah, prophets like Amos and Hosea had warned the people of the northern kingdom of Israel that God would punish them if they did not give up their evil ways. In 722 B.C. Israel was destroyed by her enemies, showing that the warnings of these prophets were completely true. It was about this time or shortly after it that Micah warned the people of Judah, saying that God would do the same thing to them if they did not stop doing the same evil things that the people of Israel had done.

Micah himself was from a small village near Jerusalem. He spoke to people who shared his language and culture and who also shared a knowledge of the history of the nation of Israel. His hearers knew as well as he did the events of the years that had just passed. It is true that these people often interpreted these events in a different way from Micah, and that Micah was trying to help them to begin to change their minds and to see things as God saw them. However, even though he was trying to change their way of thinking and acting, Micah was able to refer to events and to use expressions that his listeners understood just as well as he did.

Today those of us who want to translate the book of Micah need to recognize the enormous gap between his time and ours, and between his culture and ours. When translating, we ourselves must do everything we can to understand the culture and thinking of ancient Israel. And we must also recognize that the great majority of the people who will be using our translations do not know very much about Micah’s time. Our goal is to produce a translation that is faithful to the meaning of the book, as well as we can understand it. But we must also remember that our readers will not have all the background knowledge that we have. Therefore there may be cases where their own cultural background or way of thinking will cause them to misunderstand the message, unless we as translators take special care that the correct meaning is obvious to them. In addition, we must be sure that we are using our own languages correctly. Without realizing what they are doing, translators often begin to use sentence patterns from Hebrew or English that are not really natural in their own languages, and this can make the translation very hard to follow. 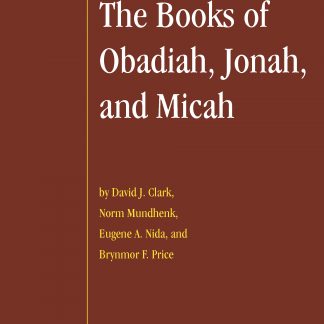