A Handbook on 1-2 Chronicles is part of the UBS Handbook Series. This is a series of “Helps for Translators” that present each book of the Bible from the unique perspective of Bible translators. This Handbook provides information about the books of 1-2 Chronicles that is especially important in helping translators and students of the Bible understand these two books as they have come to us.

The authors of this Handbook provide a brief historical background to the two books and the world that the books represent. They offer an outline of 1-2 Chronicles that views them as a single document that is presented as two separate books in our Bibles today. The authors discuss the features of the books that the translator needs to be aware of in approaching the task of translation. Textual, exegetical, cultural and linguistic information is provided, and suggestions are made for choices that translators will need to make. While the authors have not attempted to provide another commentary in addition to the many fine works that have already been written on the books of
1-2 Chronicles, they have tried to provide a thorough analysis of the two books through the eyes of the Bible translator. Thus it is our hope that anyone who reads the Bible in a translated version, church leaders and interested Bible readers alike, will find this Handbook to be as useful and informative as earlier volumes in the series before it have proven to be.

The books of 1-2 Chronicles are largely a retelling of events recorded in the books of 1-2 Samuel and 1-2 Kings, but from a different point of view. These two main purposes govern the account of the history of the Israelite monarchy in the books of 1-2 Chronicles: (1) To show that in spite of the disasters that had fallen on the kingdoms of Israel and Judah, God was still keeping his promises to the nation and was working out his plan for his people through those who were living in Judah. As a basis for this assurance, the writer looks to the great achievements of David and Solomon, to the reforms of Jehoshaphat, Hezekiah and Josiah, and to the people who remained faithful to God. (2) To describe the origin of the worship of God in the Temple at Jerusalem, and especially the organization of the priests and Levites, by which the worship was carried out. The Chronicler, that is, the writer of 1-2 Chronicles, presents David as the real founder of the Temple and its ritual, even though it was Solomon who built the Temple. 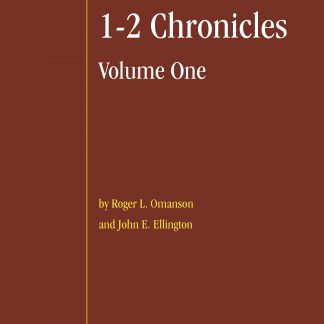