A Handbook on Genesis

The book of Genesis introduces the collection of books that make up the first six books of the Old Testament. Genesis tells about creation, the earliest human beings, and the ancestral family of Israel, and introduces the events beginning in Exodus that lead up to the conquest of Canaan told about in the book of Joshua.

The structure of Genesis “Genesis” means “beginning” or “origin,” and the book contains two major sections. Chapters 1–11 tell about creation, the flood, and the tower of Babel. In addition these chapters give the names of the earliest people, beginning with Adam and Eve and continuing to Abraham and Sarah. The second section of Genesis (11.27–50.26) places our attention on the ancestors of Israel, who received God’s promise of the land of Canaan, but who never saw the promise come true. These ancestors are Abraham and Sarah, Isaac and Rebekah, Jacob and his wives Leah and Rachel, and Joseph and his brothers. The two halves of Genesis are tied together by a single thread. This unifying element is the Hebrew expression ‘eleh toledoth, translated in older English versions as “These are the generations of . . . .” In most of its occurrences this expression is followed by the name of a male ancestor and his wife or wives (if named), his children (if named), and his descendants. In addition to the list of descendants (and sometimes the number of years they lived), stories about their lives are sometimes given. Where this generation marker occurs, the text is saying that an important ancestor has been selected, and that he and his descendants will be discussed until the next occurrence of the expression. At that point a later ancestor will become the center of attention. Throughout Genesis this expression is repeated eleven times, six in the first section and five in the second section 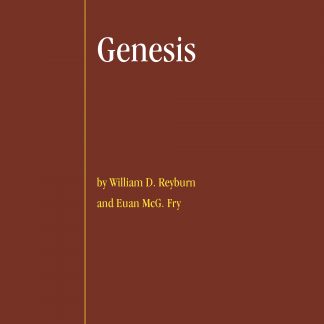 You're viewing: A Handbook on Genesis $50.00
Select options