A Handbook on Ecclesiastes

There is perhaps no book in the Old Testament that has caused so many problems for interpreters as the book of Ecclesiastes (or, as it is known in Hebrew and in many versions, Qoheleth). The kind of challenge it presents is often summarized by pointing to two well-known German scholars of the nineteenth century, Heine and Delitzsch. Heine took the view that the author was a person with very little faith and a negative view of life, while Delitzsch thought that he was a pious, God-fearing Israelite. In fact, from the earliest days of Jewish scholarship, the book has been the subject of much controversy. Scholars could not agree as to whether it was worthy of inclusion in Scripture. But finally, because it contained religious teaching at its beginning and end, and also because it was traditionally associated with the name of Solomon, the book was included in the canon. Scholars still give widely differing interpreta¬tions of its content today—some see in its pages a totally negative view of life (everything we do is useless!), while others see a positive affirmation of our life here on earth.

Because the book seems to contain so many contradictions, there are many theories that try to account for them. Barton, Jastrow, McNiele, Podechard, and Siegfried explained the apparent contradictions as the result of additions that were made by scribes and which later became part of the text. They claimed these additions presented views different from the original ones, so that the book we have today contains ideas not present in the original and in conflict with them. However, other scholars such as Galling, Herder, Kroeber, Plumptre, Ranston, and Weiser explained the apparent contradictions as coming from Qoheleth’s own troubled mind. Certain sayings reflect times when Qoheleth accepted the faith, and others come from a time when he doubted God’s presence and care.

Both of these explanations assume that there are, in fact, significant contradictions in the book. But such an approach shows a basic misunder¬standing of the nature of wisdom literature in general. An important feature of wisdom material is that it can never summarize all human experience within one brief statement. Wisdom sayings have to be general enough to make good sense, but they may not be true in every situation. Wisdom writings speak to a given context, and without knowing the proper context we may easily misunderstand them. An example from Pro 24.4 5 will make the point obvious:

These two proverbs remind us that there are times when we should respond to what a fool says, and times when he should be ignored. Circumstances will help us to decide when an action is appropriate and which action to take. It would be a mistake to conclude that, because these two pieces of advice seem contradictory, the author of the proverb did not know which action was best! In understanding Qoheleth, then, we cannot overlook this funda¬mental aspect of wisdom writing. When what Qoheleth says seems to be contradictory, he may be reminding the reader that human life is not that simple—there are inconsistencies and unan¬swered questions in this world.

Before beginning any study, however, we must note that one of the difficulties of this book is that its author uses a number of words that do not appear elsewhere in the Old Testament. For example, the word ren¬dered in the Revised Standard Version (RSV) as gain (yithron) does not occur in the rest of the Old Testa¬ment. More difficult still, some words seem to be used by Qoheleth with a meaning different than they have in other books. Such seems to be the case with the key term vanity (hevel).

Language is a living thing. Words may assume new meaning and new associations with each generation, and often in each new location. Words have meaning in particular contexts and may vary according to the intention of the writer. That is why, in the search for the message of the book of Ecclesiastes, we must study the use and the meaning of its key words, not only in biblical contexts outside this book, but more importantly, as they are used in the context of the book itself.
served as the professor of Old Testament and Hebrew at Taiwan Theological College for seven years. He was then appointed as a translation consultant with the United Bible Societies in Taiwan. He is the coauthor of Joel & Malachi: A Promise of Hope—A Call to Obedience in the International Theological Commentary series.

Lynell Marchese Zogbo (PhD, UCLA) is an author, editor, and African language specialist. She served in francophone Africa for 28 years as a consultant for the United Bible Societies.. 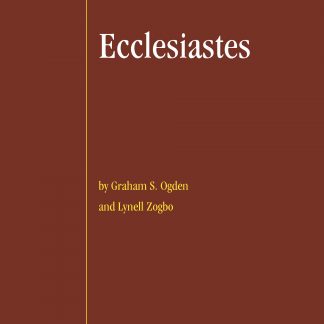