A Handbook on Lamentations

The book of Lamentations poetically depicts the horrible atrocities that struck the city of Jerusalem and its inhabitants when the city was invaded by the Babylonian army in 587 B.C. It does so in part by contrasting the greatness and glory of the past with the abject misery of the present, which is the result of the defeat of Judah and the destruction of its capital city. But Lamentations is much more than a recital of sufferings; it is a confession which accepts God’s word that he would destroy the nation and punish its people for their iniquity.

The events which the poet describes came as a crushing blow to Israel. For more than four hundred years direct descendants of King David had ruled, and so the words spoken to David by the prophet Nathan (2 Sam 7.16) appeared as solid as stone: “And your house and your kingdom shall be made sure for ever before me; your throne shall be established for ever.” Now, however, there was no more kingdom, king, or throne. Everything that was believed to be permanent and guaranteed by God had been swept away by pagans, and it was an angry God who had used these foreigners to bring judgment on his people.

In spite of the total loss of everything held sacred and dear, the poet does not urge survivors to find consolation in Israel’s glorious past. He recognizes clearly that the greatness of the past has ended in horrible judgment. Neither does he look forward to a happy tomorrow when Israel will again reclaim her position among the nations. Instead he shows us, in the very heart of the book (chapter 3), an ordinary man who has known the depths of suffering and who, in spite of it all, remembers that the steadfast love of the LORD never ceases, that the LORD’s mercies are new every morning (3.22 23); and so he says “Therefore I have hope” (3.21). This individual who asks “Why should a living man complain . . . about the punishment of his sins?” (3.39) knows that it is not God’s final will for people to suffer and to be crushed (3.34 36). 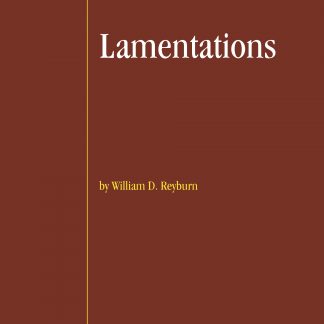