A Handbook on Joshua

Each book in the Bible was written with certain religious goals in mind, and the book of Joshua is no exception. This is in part what makes these books sacred literature. Definite religious themes have in fact determined not only the content and structure of Joshua but also its place in the Hebrew Old Testament. We shall first consider the religious significance of the place which it occupies in the Hebrew Old Testament.

It may be argued that the book of Joshua was placed immediately following the “Books of Moses” primarily for logical and chronological reasons. No doubt this was in some respects a determining factor, for the book of Joshua does indeed describe the continuation of events put into motion in these earlier books. However, its oneness with the content of the first five books of the Old Testament is more theological than chronological. That is, the author’s primary concern is to reveal how the Lord kept his promise to give the land of Canaan to the descendants of the patriarchs (see Gen 13.14 17; 15.7,18; 17.8; 26.3 4).

The book of Joshua also forms a theological bridge to the period of the judges and of the kings. It thereby draws a sharp contrast between the idealized period under Moses and Joshua, when the people of Israel were faithful to God, and the evil times which followed, when the people were not firm in their commitment. Joshua is the first book in the section of the Hebrew Bible known as “the formed prophets” (Joshua 2 Kings), and it unfurls a prophetic interpretation of history. It sees history as determined by the response which God’s people make to him. Obedience guarantees them the possession of the land, whereas disobedience deprives them of this possession and ultimately drives them into exile. 2 Kinds, the last of “the formed prophets,” closes with the account of the fall of Jerusalem, the destruction of the Temple, and the deportation of the people to Babylonia. Thus the autor of this section closes with a message of warning for his readers: remain faithful to the Lord, as did Joshua and the people of his generation; otherwise there is always the danger of losing the land, as it happened during the time of the kings.

The basic religious thrust of the book of Joshua is the affirmation of the Lord’s absolute sovereignty in the life of Israel. The conquest of their enemies was accomplished solely by the Lord’s power. It was he who made the walls of Jericho crumble, and later caused the sun to stand still so that Israel’s victory over the Amorites would be absolute. The assigning of the cities and the territories to the various tribes is in itself an act of God’s grace, and even the lists of towns and of territorial boundaries take on a theological significance. The same Lord who gave the land to Israel now determines the relationship of the tribes to one another and to their Lord.

This double act of salvation, which consists of victory over Israel’s enemies and of creating an organized society, is best summarized in the Lord’s own words: “But I gave you victory over them all. As you advanced, I threw them into panic in order to drive out the two Amorite kings. Your swords and bows had nothing to do with it. I gave you a land that you had never worked and cities that you had not built. Now you are living there and eating grapes from vines that you did not plant, and olives from trees that you did not plant” (24.11b 13,TEV). 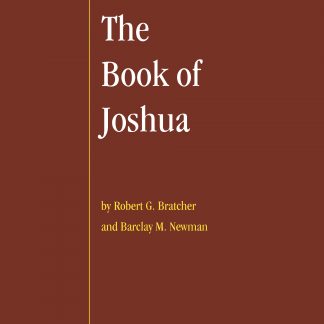