A Handbook on Judges

Judges is a fascinating book, full of exciting stories about heroes such as Deborah, Gideon, and Samson, who won great victories in Israel. But it is far more than a set of accounts of military victories and defeats. Through a series of narratives, it paints a very clear picture of the life of the Israelites between two important time periods: the conquest under Joshua and the monarchy set in place by King David.

The stories in Judges, at times somewhat humorous, are also often quite disturbing, because they recount horrifying events in great and gruesome detail, including assassination, rape, and civil war. Within these pages, the LORD seems to be continually punishing his people, because they were unable to drive out the Canaanites from the Promised Land. Further, the leaders he chose to deliver his people were often far from ideal. In this book the Israelites spend a good part of their time suffering terribly under the hand of cruel oppressors or, worse, making war against each other. Indeed, some exegetes have trouble coming to terms with many of the accounts here. However, it is, in fact, through its graphic and at times exaggerated descriptions of negative events during this time period that this book decries the ills affecting Israelite society so deeply: lack of unity, lack of leadership, lack of respect for foreigners and women, lack of love for God and for one’s own brothers. In so doing, the book affirms core values of this people and their religion: respect for the other, respect for God’s Law, and ultimately respect for Yahweh, whose main preoccupation here seems to ensure he is “the only God before them.”

Besides the themes of cowardice, idolatry and immorality, other themes of loyalty, perseverance and heroism stand out. Thus, if properly understood and well rendered in translation, this book has much to say to modern audiences today. 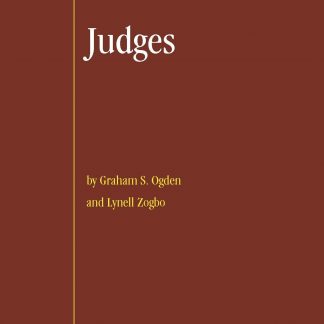 You're viewing: A Handbook on Judges $45.00
Select options