A Handbook on Ezra and Nehemiah

From a historical point of view Ezra-Nehemiah covers a period of approximately 140 years, from the time when Cyrus became emperor of Babylonia (539 B.C.) to the time of the reforms of Nehemiah during his second term as governor of Judah. The book of Ezra narrates the return of Jewish exiles from Babylonia to Judah, the reestablishment of sacrifices, the rebuilding of the Temple, and the celebration of the Passover. This is followed by the appointment of Ezra by Artaxerxes to restore the Law of Moses as the law of Judah and to regulate the affairs of the Temple. After this comes the account of Ezra’s activities. The book of Nehemiah recounts the appointment of Nehemiah as governor of Judah by Artaxerxes with permission to rebuild Jerusalem. During his first term of twelve years, the wall of Jerusalem was rebuilt, the city was resettled, the Law of Moses was re-established by Ezra, and the wall was dedicated. On his return for a second term he carried out various reforms in the religious life of the community.

While it may appear that Ezra-Nehemiah is a straightforward historical narrative, it has become more and more evident to scholars that the concern of the author/compiler was not with recording a chronological history. His concern was instead with creating a narrative that demonstrates the continuity of the of the Jewish community of the past with the new Jewish community that was being formed. The narrative shows how God took a people who had been defeated and exiled because of their sins and returned them to their land and how he then created a new nation with a restored Temple, city, community, and worship. There are three returns and restorations in Ezra-Nehemiah: 1) return of exiles with Sheshbazzar, 2) return of Ezra with Levites, and 3) return of Nehemiah as governor. Within each of these portions of the narrative there is a three-fold progression of 1) return authorized by the Persian emperor, 2) opposition from enemies, and 3) overcoming the opposition with divine help. But at the end of Nehemiah there are still shortcomings that need to be corrected.

What has been related up to this point is supposed to serve as a model to the people that they may return to God’s Law and be reformed with God’s help. The notes in this Handbook follow the canonical form of the text of Ezra- Nehemiah and are not primarily concerned with solving historical problems and inconsistencies, but with helping the translator to understand the progression of the narrative and its content. 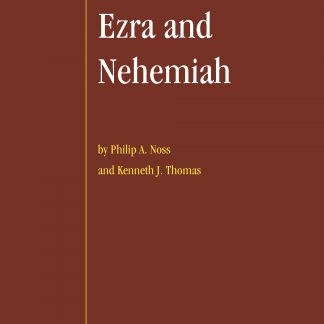