A Handbook on Amos

Very little is known about the prophet Amos himself. For example, nothing is known about the dates of his birth and death, the age at which he began his prophetic activity, or even the length of time that activity con­tinued. Amos does inform us that he did not belong to the Northern Kingdom of Israel to which he preached his messages; he came from the town of Tekoa in the mountains of Judah, twenty kilometers south of Jerusalem. It is clear that Amos’ prophetic ministry took place in the time of Jeroboam II, who ruled over Israel from 787/6 – 747/6 BC. The earthquake mentioned in 1.1 has been confirmed by archaeological evidence and has generally been dated 760 BC

Amos’ time was one of peace, prosperity, and the expansion of Israel’s territory. Previously, in the last part of the ninth century, Syria had made attacks on Israel, but these stopped after the Assyrian king Adadnirari III captured the Syrian capital of Damascus in 800. So Syria had been powerless for at least twenty years, and Israel enjoyed a period of stability. However, the stability of Amos’ world was also breaking down. Because of shifts in world power, Assyria was now being forced to lessen its pressure on Syria. So Amos lived in the shadow of new border incidents like the one referred to in 1.3.

The prosperity of Amos’ time can be seen in his mention of commercial activities (8.5), flourishing agriculture (5.11), and new developments in the fields of architecture (3.15) and music (6.5). However, it was also a time of social and economic injustice, when rich people became increasingly richer, and poor people became poorer. Amos mentions practices like selling honest people into slavery simply because they could not pay their debts (2.6), taking advantage of the poor (8.4), and taking bribes (5.12).

Amos states that it was the Lord who ordered him to go and prophesy to the Lord’s people Israel (7.15). This means that the message he delivered was the message of the Lord. Amos shows the Lord acting in the history of the times and dealing with the sins of the people. He usually expresses the Lord’s acts by verbs, not by nouns, so that what the Lord does and will do is told clearly. Theological vocabulary is carefully avoided.

The Lord speaks to people through the prophet: he first speaks to Amos, or shows him something through a vision. But even when the Lord uses a vision, the picture itself is not as important as the Lord’s words which accompany it. The primary message which Amos receives and passes along can be summarized in a few words: the Lord will come to judge because Israel has sinned. 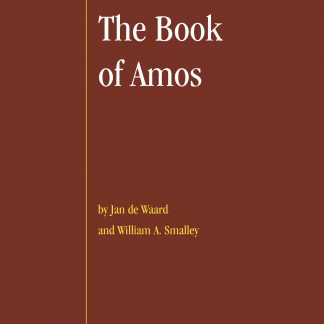