A Handbook on Jeremiah

The sheer length of Jeremiah (longer than either Isaiah or Ezekiel) and the complexity of its composition combine to create enormous challenges for the translator. In fact, Jeremiah is not really a “book” in the sense that most readers today would normally describe a book—it has neither an overall orderly arrangement nor clearly defined contextual settings for interpreting many of its individual parts. For this reason, translators are often compelled to introduce somewhat arbitrary section headings, and they must attempt to make sense of an individual passage before deciding upon the next more-or-less arbitrary section. In this regard, both Today’s English Version (TEV) and the Contemporary English Version (CEV) have introduced numerous section headings, so that the uninitiated reader will at least have some key to understanding the individual sections themselves. As is well known, the book of Jeremiah is not put together according to a chronological arrangement, and it is only with difficulty that we can uncover even a topical arrangement of the sayings and deeds recorded in it.
Authors 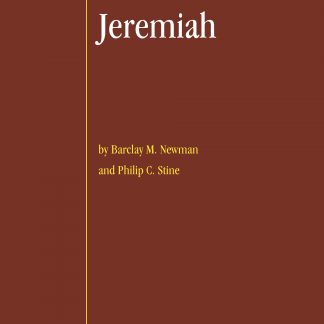 You're viewing: A Handbook on Jeremiah $50.00
Select options