A Handbook on Hosea and Joel

The opening of the book of Hosea tells us when the prophet Hosea did his work. It does so by mentioning the kings who ruled during Hosea’s time. Although he was a prophet who lived and worked in the northern kingdom, Israel, the first kings listed are from the southern kingdom, Judah. These rulers of Judah were in power during the ministry of Hosea: Uzziah (781–740 B.C.), Jotham (740–736 B.C.), Ahaz (736–716 B.C.), and Hezekiah (716–687 B.C.). Meanwhile, the only king  of the northern kingdom mentioned is Jeroboam II (son of Joash), who ruled 783–743 B.C. It is not clear why other kings of the northern kingdom are not mentioned.

One can imagine reasons why the other kings were not mentioned. Were they not really important, since they ruled for such short periods? Did the writer believe that they were not really kings who were chosen in the proper manner? This is quite possible, but very likely we will never know for sure. 2 Kgs 15 and 17 mention that the kings after Zechariah either came to power only by seizing it or had to pay tribute to the king of Assyria. Fortunately our task is simply to translate what is there.

The important thing to remember is that the message of this book arises out of a period when people of the northern kingdom had forsaken Yahweh, the God of Israel, and were worshiping other gods. All of this led to the end of the northern kingdom, when the Assyrians captured the people and removed them out of their own land (722 B.C.).

It will be useful to keep in mind the religious situation at the time of the prophet Hosea. People were accustomed to worshiping the God of Israel at local shrines and altars, just as Samuel did when he and Saul met for the first time (1 Sam 9). It was not until the days of King Josiah (640–609 B.C.) that an important manuscript was found in the Temple, one that we now recognize as having the basic teachings of the book of Deuteronomy. It is Deuteronomy that insists on a central location for worship, not Exodus, Leviticus, or Numbers. So it is possible that the people of God lived for centuries in Jerusalem without having Deuteronomy available for them. And so, when King Josiah insisted that God’s people follow that system of centralized worship in Jerusalem, Israel in the north had long ago been carried away into Assyrian captivity (722 B.C.).

The first three chapters of this book are a mixture of narrative and poetry, although the poetry is included in the narrative. They tell about Hosea’s personal life. We should remember that a prophet’s personal experiences were often a means for God to bring his message to his people (for example, see Jer 13.1-11). In this case we read how Hosea was commanded to marry a woman, Gomer, who became unfaithful to him. We can imagine the feeling of anguish Hosea experienced. We suspect he learned of his wife’s adultery only gradually, for the names he gave his children seem to show that he gradually realized they were not truly his children: The name of the first child, Jezreel, means “God sows” and does not indicate a personal problem, even though the name carries a prophetic message. However, the name of the second child, “Not pitied,” shows a strange attitude toward a child. And the last child’s name, “Not my people,” indicates a clear recognition that the child was not truly his but that of another man. Although Yahweh named the children, the names also show how Hosea must have felt about the situation. And Yahweh, the God of Israel, revealed his own anguish by means of the anguish of Hosea. He saw how his people were gradually moving away from him, their true God.

“Pathos”—meaning deep feelings, anguish—is an important feature of the book. The Jewish scholar, Abraham Heschel, traces this as a common feature in the prophetical writings prior to the Babylonian captivity, and especially in the book of Hosea. After all, we have a man whose marriage was torn apart. And this situation is matched by God’s feelings toward his chosen people. Thus there is real anguish reflected in the book of Hosea and in the writings of prophets after Hosea’s time who speak of Israel’s unfaithfulness.

Therefore translators should be prepared to search deeply for well-known words in their own languages that express deep emotion. How does one describe the way a woman or a man feels when a spouse is unfaithful? Will there be anger? A deep desire for a return? A feeling of disgust? A remembering of how wonderful the former feelings of love and compassion used to be? This will be one of the important challenges for anyone who translates the book of Hosea. 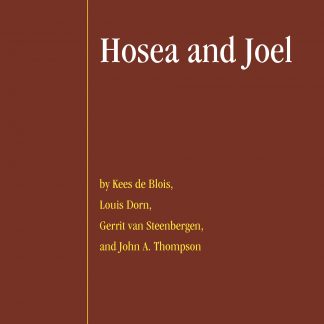 You're viewing: A Handbook on Hosea and Joel $40.00
Select options