A Handbook on Ezekiel

A Handbook on Ezekiel is part of the UBS Handbook Series. This is a series of “Helps for Translators” that present each book of the Bible from the unique perspective of Bible translators. This Handbook provides information about the book of Ezekiel that is especially important in helping translators and students of the Bible understand this book as it has come to us.

The authors of this Handbook provide a brief background to the book of Ezekiel and the world that it represents. They also offer a detailed outline of the book. The authors discuss the features of the book that the translator needs to be aware of in approaching the task of translation. Textual, exegetical, cultural and linguistic information is provided, and suggestions are made for choices that translators will need to make.

While the authors have not attempted to provide another exegetical commentary in addition to the many fine works that have already been written on the book of Ezekiel, they have tried to provide a thorough analysis of the book through the eyes of the Bible translator. Thus, it is our hope that anyone who reads the Bible in a translated version, church leaders and interested Bible readers alike, will find this Handbook to be as useful and informative as earlier volumes in the series before it have proven to be.

The book of Ezekiel poses special problems for the translator. It is a very large book (with 1273 verses, it is the sixth longest in the Bible), and it contains visions of  supernatural things that are very difficult to describe, much picture language, and words that are confronting and embarrassing. It is a book with many threats of judgment and punishment, but it also has beautiful passages of encouragement and hope.

Ezekiel’s message is closely tied to the experience of the Jews in exile in Babylonia. Not only had they lost their property and homes, but they found themselves facing a religious loss as well. They believed that God had given them the land that they had had to leave, and the center of their worship was the Temple in Jerusalem that had been destroyed. They wondered whether God had abandoned them and whether it was even possible to worship God in this foreign setting. But Ezekiel assures the people that they will return from exile to their land—they are still God’s chosen people. God will give them a new heart, give them back their land, and restore the Temple.

Through the visions that God gives him, Ezekiel also sees that God is present throughout the world, and that even after the Temple is restored, he will be with the people everywhere. Ezekiel also makes it clear to the people that the misfortunes they experienced were not somehow accidental, but rather that God had made them happen because of the people’s evil deeds. Similarly, it would be God who would lead them home again and defeat their enemies, not because the people of Judah deserved it, but because God would thereby show to all his power and make all people to see that he is the LORD.

Dr. Philip Stine was a translation consultant in Africa with United Bible Societies for fifteen years, then served as global coordinator of the UBS translation program, and for six years was the UBS Director for Translation, Production and Distribution Services. He co-authored with Barclay Newman the UBS Handbooks on Matthew and Jeremiah, and is the author of Let the Words Be Written: The Lasting Influence of Eugene A. Nida and Four Hundred Years On The Best Seller List, the history and impact of the King James Bible. 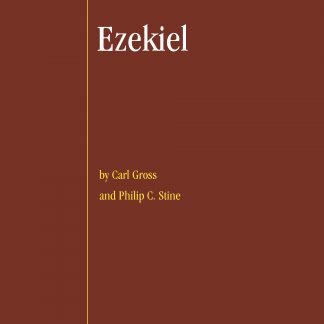 You're viewing: A Handbook on Ezekiel $55.00
Select options