A Handbook on Exodus

The book of Exodus has been called ‘‘the Gospel of the Old Testament,’’ for it records God’s grace as well as God’s law. It tells the good news of how God miraculously delivered the descendants of Jacob from slavery in Egypt and set them on a journey to the Promised Land. It also reports how the people responded to this divine act as they received the Ten Commandments and were drawn into a covenant relationship with the God of their ancestors. Here is the story of the historic event on which the very faith of Israel was based. It is a story of the agony and the ecstasy of a new nation being born, a nation destined to become God’s chosen people. Through them God’s grace and truth would be made known to the world. The entire Old Testament was eventually written and preserved in the light of this unique experience of God’s saving grace.

This Handbook is a verse-by-verse commentary on the book of Exodus and has been prepared primarily to assist translators of the Bible throughout the world. It is hoped, however, that all who are interested in understanding and interpreting Exodus will find it useful. A knowledge of the original Hebrew is not required, but this commentary does provide a detailed analysis of the Hebrew text in light of the overall message of the book. It also offers numerous suggestions of how the meaning of each verse may be expressed in contemporary languages. The text of the Revised Standard Version (RSV) is followed throughout because it is a reliable literal translation, but an even more literal rendering of the Hebrew is frequently provided where it may help to clarify the meaning for translators. The text of Today’s English Version (TEV), popularly known as the Good News Bible, is frequently cited to bring out the basic meaning in more natural English idiom. Other translations such as the Contemporary English Version (CEV) are often quoted to show various ways in which the meaning may be expressed. Every effort has been made to let the Hebrew text speak for itself without discussing various doctrinal interpretations that have been drawn from it. 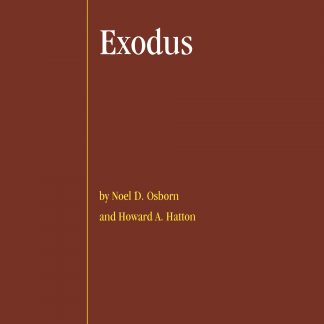