A Handbook on Job

The Book of Job is a story told in the form of a poem. It begins with a prose introduction describing Job as a good man who is faithful to God, wealthy, and concerned for the right relation between God and his family. In a meeting between God and Satan, God permits Satan to test Job’s loyalty. These tests result in the destruction of Job’s family and wealth. He is reduced to sitting in agony on a pile of ashes, where three friends find him when they arrive to bring him comfort. In his despair Job regrets that he was born and curses his origins. The friends enter into three rounds of lengthy arguments with Job, in which they maintain that Job’s suffering is the result of his sin. Job argues against them, insisting stubbornly that he is innocent, and demands that God appear in court with him. These speeches make up the main body of the poem.

After the three rounds of speech arguments, there is a poem on wisdom, and then Job gives his final speech, in which he recalls his former happy days and compares them to his present suffering and shame. When Job becomes silent, a young man who has overheard the arguments, and who is unhappy with the way the three friends have confronted Job, delivers lengthy opinions about Job’s tragedy. His remarks are essentially a repetition of the traditional wisdom expressed already by the friends. Finally the LORD speaks out of the storm and confronts Job with many unanswerable questions concerning creation and nature. Job confesses his ignorance, and the poem ends in prose, as it began. Job and his friends are reconciled with each other and with God, and Job is restored to even more than his former glory. In his old age Job dies.

The Book of Job is considered by many to be the most expressive poem ever written. The heart of the poem is a dispute between Job and his three friends Eliphaz, Bildad, Zophar, and a late-comer, Elihu. Fundamental to their arguments is the question of God’s fairness in dealing with his creatures. Stemming from this is the question “Why do the righteous suffer?” The friends marshal a host of arguments to support the traditional view that righteousness always brings prosperity and good fortune, whereas wickedness gives rise to suffering. There is no reason to doubt that Job subscribes to this same principle; however, Job’s integrity will not allow him to apply it to his own situation, because he knows in his heart that he is innocent of wrongdoing. Therefore he stubbornly resists every effort by the friends to get him to admit to being wicked and be restored to God’s favor. 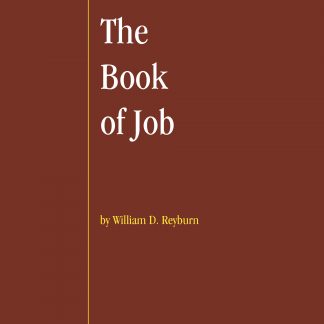 You're viewing: A Handbook on Job $40.00
Select options