The ancient Greek version, called the Septuagint, divided the books that we know as 1 and 2 Samuel and 1 and 2 Kings into four parts under the title “Books of Kingdoms.” They were called 1, 2, 3, and 4 Kingdoms. Jerome, the translator of the Latin Vulgate, changed the titles to 1, 2, 3, and 4 Kings. The Hebrew tradition, on the other hand, continued to preserve the two books of Samuel as one book. Finally, however, under the influence of the Greek tradition, the printed Hebrew Bomberg Bible of A.D. 1517 divided the book of Samuel into two books. Today both Jews and Christians usually call these two books 1 Samuel and 2 Samuel.

These names do not adequately reflect the content of the two books, since Samuel is the central figure only in 1 Samuel 1–12. Saul is the central figure in the remainder of 1 Samuel, just as David is the main character in 2 Samuel. If tradition were not such a strong influence, translators might provide titles that more specifically indicate the contents, titles such as “The Book about Samuel and King Saul” for 1 Samuel and “The Book about King David” for 2 Samuel.

The English translation of Ronald Knox, which is based on the Latin Vulgate, follows the Vulgate tradition and gives the name of 1 Kings and 2 Kings to the books normally called 1 and 2 Samuel. This version then names the books traditionally known as 1 Kings and 2 Kings “3 Kings” and “4 Kings.” Where there is no firmly established tradition, this may be a better solution to the problem of book titles than using the traditionally accepted headings. But because of the strong tradition both in Judaism and in Christianity, it may be necessary in many cases to retain the traditional titles. Translators may need to expand on the titles to include subtitles that give a better idea of the content of the books. For example, it would be possible to say something like “The First Book of Samuel: the Story of Samuel and King Saul” and “The Second Book of Samuel: the Story of King David.” The use of expressions like “Book of Samuel” is contrary to the advice usually given to translators with regard to constructions containing the preposition “of,” since Samuel most likely did not write these books. For many translators there may be no alternative to the use of this rather vague title. The addition of subtitles, however, will provide the reader with a more meaningful and helpful clue regarding the content of the books. Some translators may be able to use titles such as “The first book called Samuel” or “. . . named [for] Samuel.”

Since these books in their present form were not written by Samuel (see the comments below on authorship), translators should definitely avoid a title such as “The First (or Second) Book Written by Samuel.” An explanatory footnote should probably also be provided. It would be equally inaccurate to use a title such as “the First/Second Book about Samuel,” since this would give a totally false impression of the content of the book.

The books of Samuel are a continuation of the story of the people of Israel as told in the books of Joshua and Judges. They describe the gradual incorporation of the twelve tribes of Israel into a single political unit and their eventual adoption of the system of kingship. They go on to depict most of the reign of David, including all his troubles 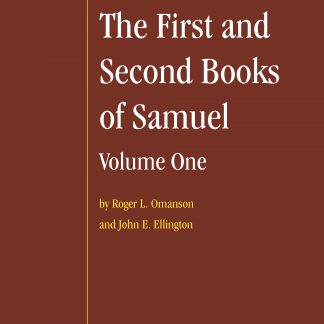