A Handbook on The Shorter Books of the Deuterocanon

The book of Baruch (also known as 1 Baruch) is presented as a message that Baruch, the companion of the prophet Jeremiah, sent from Babylon to the religious authorities in Jerusalem. There are three distinct parts to this message: prayers (1.15–3.8), a poem in praise of Wisdom (3.9–4.4), and a series of poems offering comfort to the Jews living in Babylonian exile and to those remaining in Jerusalem. There is a cover letter from the exiled community that is placed before Baruch’s message (1.10-14). And before this is a narrator’s introduction to the reader (1.1-9)

The Letter of Jeremiah

This little book, known as “The Epistle of Jeremy” in KJV, is often presented as chapter 6 of Baruch, but it is clearly independent. It is easy to account for its association with Baruch, however. Just as Baruch consists of a “letter” written to Jerusalem by Baruch, this is a “letter” said to be written by Jeremiah to the exiles in Babylon. Since Baruch was a close companion of Jeremiah, these two writings were quite naturally grouped together. Translators choosing to present this as chapter 6 of Baruch must, of course, add it to their outline of Baruch, but in such a way that it is not incorporated into Baruch’s book, which is Baruch’s communication to Jerusalem.

The Additions to Daniel

The “Additions to Daniel” consist of three passages that are not found in the Hebrew Bible, but do appear in the Greek Bible as well as the Latin Vulgate. (The term “Hebrew Bible” is a bit imprecise here, since Dan 2.4b–7.28 is actually in Aramaic rather than Hebrew.) This expanded Daniel is considered canonical Scripture in the Catholic and Orthodox churches. Jews and Protestants do not accept them as canonical; Protestants include them as part of the Apocrypha (Deuterocanon). The three added passages constitute three distinct books in the Apocrypha, each with its own verse numbering. These books, along with their corresponding passages in the Catholic Bible (NAB), are: The Prayer of Azariah and the Song of the Three Young Men = Dan 3.24-90, Susanna = Dan 13.1-64, Bel and the Dragon = Dan 14.1-42

In the Catholic and Orthodox Bibles this material has no name to separate it from the rest of Daniel, since it is considered an integral part of the book. Nor does it have a name in Greek manuscripts, where it forms part of Daniel. Names in the Protestant Apocrypha vary. KJV knew it as “The Song of the Three Holy Children.” NRSV calls it “The Prayer of Azariah and the Song of the Three Jews.” NEB knows it as “The Song of the Three.” This material is inserted between 3.23 and 3.24 of the Aramaic Daniel text. In that context three young Jews, named Shadrach, Meshach, and Abednego (Hananiah, Mishael, and Azariah in Hebrew), are ordered to be thrown into a fiery furnace by King Nebuchadnezzar of Babylonia because they have refused to worship his god. The furnace was heated seven times hotter than usual, and the men who tossed these three young men into the flames were themselves burned to death

This story is about a beautiful Jewish woman named Susanna who lived in Babylon. When two judges falsely accuse her of being unfaithful to her husband, Daniel as a wise young judge is able to prove her innocence. The Masoretic Text of Daniel contains the twelve chapters that are translated as the book of Daniel in Jewish and Protestant Bibles. The Greek Old Testament, however, contains two additional chapters, besides the long addition to chapter 3 (see “Translating the Additions to Daniel,” page 183). These chapters constitute part of the canonical Daniel in the Orthodox churches. They were translated into Latin, and became part of the Vulgate. They are part of the canonical Daniel in other Catholic Bibles as well. The Catholic Bible numbers the story of Susanna as chapter 13. The Orthodox Bible begins the book of
Daniel with the story of Susanna; this is its position in Theodotion’s Greek text (see the paragraph below). Protestant Bibles include Susanna as a separate book of the Apocrypha, consisting of one chapter

Bel and the Dragon

Bel and the Dragon (Bel and the Snake in some translations) is a separate book of the Protestant Apocrypha, but for the Orthodox and Catholics it constitutes part of the canonical book of Daniel. In Catholic Bibles it is chapter 14, the last chapter, of Daniel (see “Translating the Additions to Daniel,” page 183). The main character in the chapter is Daniel, who appears in much the same way as in Susanna (Dan 13), although here perhaps not so much wise as clever. There are obvious parallels between this chapter and chapter 6 of Daniel. The traditional name given to this additional chapter, Bel and the Dragon, is
somewhat misleading since it suggests that Bel and the dragon have something to do with each other, while actually there is a story of Daniel and Bel and another about Daniel and the dragon.

The Prayer of Manasseh

The Prayer of Manasseh is a little jewel, a treasure of spiritual devotion. In spite of the fact that this prayer has never achieved canonical status or even, for most Christians, deuterocanonical status, it will simply not go away. It is received as canonical Scripture by the Orthodox churches, which place it immediately after 2 Chronicles. Its Greek text is not part of the Septuagint, and it has never been accepted as Scripture in the Catholic Church, although it has long been known and highly valued; in a Latin form (later than Jerome) it appears in an appendix at the end of Vulgate editions of the Bible. Martin Luther treasured it and translated it, making it part of his Apocrypha. As such it found its way into English Bibles, although Wycliffe himself had included it in his translation. In the Geneva Bible of 1560, it appears among the Old Testament books, following 2 Chronicles, but headed “Apocryphe.”

The book of Psalms in the Hebrew Bible consists of 150 psalms. These psalms are accepted as canonical Scripture by Jews and all Christians. However, the Greek manuscripts of the book of Psalms contain 151 psalms; this additional psalm is considered part of the canonical book of Psalms by the Orthodox churches. It has not traditionally been included among the apocryphal books of Protestant Bibles, but RSV expanded its Apocrypha in an “expanded edition” in 1977 to include Psalm 151, as well as 3-4 Maccabees, other books valued in the Orthodox tradition. NRSV continued this practice. 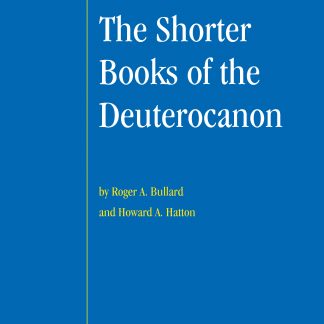