A Handbook on Nahum, Habakkuk, Zephaniah

The short prophecy of Nahum is concerned solely with the fall of Nineveh, the capital of the Assyrian empire. There is no statement within the book about when it was written, but certain limits can be set, based on references to histor¬ical events whose dates are known. In 3.8 10 the prophet speaks of the fall of the Egyptian city of Thebes. This took place in 663 B.C., so the Book of Nahum must be dated later than that. The prophet also speaks of the fall of Nineveh as something which was inevitable at the time of writing and could not be long delayed (2.1). Nineveh was actually captured by the Babylonians and Medes in the middle of 612 B.C., so it seems most probable that the Book of Nahum comes from a time shortly before that date, say 613 or early 612. Such a date could also explain the fact noted by many scholars that Nahum, unlike almost all the other prophets, makes no mention of the sins of Judah. Under the godly king Josiah a national reform of religion had been started in 621 B.C., and this con¬tinued in effect until Josiah’s death in 609. If Nahum was writning in about 613, the social evils spoken about, both by earlier prophets like Zephaniah and by later ones like Habakkuk, were probably being suppressed by Josiah..

How can God, who is holy and just, use evil men to fulfil his purposes in the world? This question is the main topic of the prophecy of Habakkuk. The book is therefore unusual in that it deals with the prophet’s challenge to God rather than God’s challenge to his people.

Zephaniah is probably the earliest of the prophets who brought the message of the Lord to the people of Judah in the seventh century B.C. Most commentators agree with the statement in the Introduction to Zephaniah in TEV which places his work in the years shortly before the great reform carried out by King Josiah in 621 B.C. For more details about this, see 2 Kings 22  23 and 2 Chroni¬cles 34  35.

Zephaniah was convinced that the day was near when the Lord would act to judge all the nations. It is possible that the background to this belief lay in an invasion from the north by a fierce nomadic nation of horsemen called the Scythians. According to the Greek historian Herodotus, the Scythians swept as far south as the borders of Egypt. So far as is known they did not attack or pass through Judah, but traveled through the coastal plains occupied by the Philis¬tines. If the invasion of the Scythians took place about 627 B.C., Zephaniah’s prophetic work would most likely date from shortly after this.

Some scholars have felt that certain parts of the book come from a later time than the seventh century B.C., but there is little general agreement. Such questions are rarely of concern to translators and therefore are not discussed in this handbook. 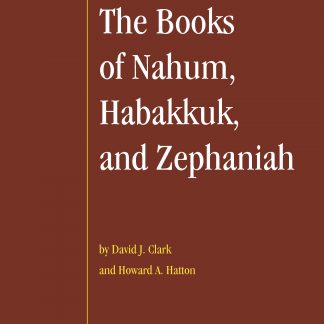