According to most counts, at least one third of Old Testament texts are poetic. In many languages worldwide, translators first work on the New Testament, and then move on to translate the Old Testament. But for most of these experienced translators and their consultants, rendering Hebrew poetic texts presents a completely new challenge. They must now deal with a whole new literary category, which itself is divided into many sub-genres (praise, lament, didactic, prophetic, proverbial, etc.) and learn to recognize and understand the impact of diverse, highly sophisticated stylistic features. The latter include sound and structural effects, such as repetition, alliteration, assonance, rhythm and even rhyme, on the one hand, and on the other, important structure-defining mechanisms, such as parallelism, chiasm, inclusio, and enallage. In particular, understanding parallelism is key to an effective exegesis of almost all poetic texts.

In this revision, Zogbo and Wendland have kept the main elements of their popular 2000 version, but have added to the discussion, more current notions of translation skopos and text performance, a more detailed look at parallelism, and have attempted to speak to a wider general and scholarly audience. While the first version was written for translators with little or no knowledge of biblical Hebrew, this 2020 revision makes much more reference to Hebrew and the Hebrew text, both in the explanatory discussion and in the graded exercises. Thus, this new, second edition of Understanding Hebrew Poetry is an appropriate textbook for both beginners and more advanced students, be it in translation workshops, training courses, or personal study. Several articles have been added to the appendix, which enhance and modernize this already helpful text. 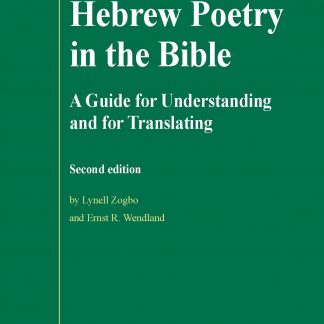 You're viewing: Hebrew Poetry in the Bible – A Guide for Understanding and for Translating (Revised) $35.00
Select options