The dilemma of the Bible translator is that the Bible is both a historical document and a literary document. That duality finds its way into every verse of every chapter of the Bible. The historicity of the text pulls the trans-lator toward formal (word-for-word, sentence-for-sentence) translation. The literary, rhetorical nature of the text pulls the translator toward literary, rhetorical, and poetic equivalence, that is, toward making the same emotive impact on the reader that the original did. That usually requires considerable restructuring and transformation. There is no “happy medium,” only various unhappy ones, or rather, unhappy readers on one side or the other!

The first question that a translator must ask is this: Is the immediate context of this word primarily RHETORICAL or primarily NON-RHETORICAL. “Primarily” because some texts are difficult to categorize and  “non-rhetorical” to avoid the word “historical” that carries with it problems of determining what “history” is in the context of ancient texts.

One element of a translator’s task is dealing with technical terms, and particularly whether they should be translated in a way that makes the item familiar to the reader (“domestication”), or leaves the item a bit strange (“foreignization”). A typical example is in measurements. A Bible translator who converts Jewish “cubits” to feet and inches (or to metric units) “domesticates” the text by using measurements that are familiar to the reader, while a translator who leaves “cubits” in the text is (in many cases) “foreignizing” the text. A translator who uses “figi” (from English “fig”) in the text (rather than a local word) is “foreignizing.” The “foreignness” of the whole translation is determined by the accumulation of decisions to domesticate or foreignize measurements, vocabulary, and even grammar, throughout the translation. 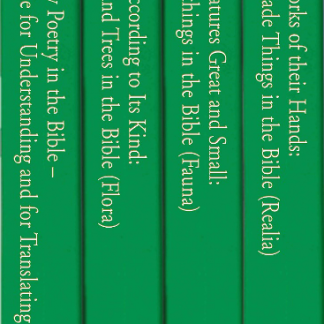