A Handbook on Haggai, Zechariah, Malachi

These are the last three books found in the Minor Prophets (sometimes referred to as “the Twelve”). This means that they are also the last books in the section of the Scriptures called in Hebrew nevi’im (“the Prophets”). Although in most English Bibles these books of the prophets are at the end of the Old Testament, they are not at the end of the Hebrew Scriptures, but are followed by another section called “the Writings.”

The book of Haggai comes from the time when the Jewish people had returned from exile in Babylonia and were in the process of reestablishing their national life and worship in their former homeland.

Both Christian and Jewish scholars have admitted for a very long time that the prophecy of Zechariah is one of the most difficult books to understand. The book falls into two parts: chapters 1–8, which relate to a historical situation very similar to that addressed by Haggai, and chapters 9–14, which are a different type of literature, and which do not seem to relate to the same situation. Since the two parts are distinct in structure and content, and both are quite long, we will deal with the two parts separately, with an introduction to each part in the relevant place.

The book of Malachi probably comes from a period somewhat later than that addressed by Haggai and Zechariah 1–8. It was a time when religious life was at a low ebb. The book is a series of conversations or arguments between the prophet and the people of his day.

In this Handbook we discuss each of the books separately. There are however a number of important translation matters that are common to all three, so in order to avoid repetition we deal with them here in this general introduction. 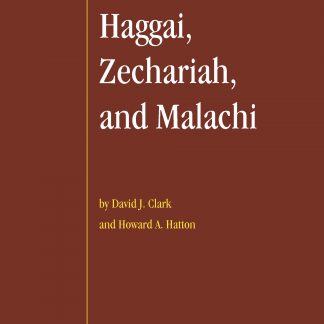 You're viewing: A Handbook on Haggai, Zechariah, Malachi $40.00
Select options