Structure and Orality in 1 Peter – A Guide for Translators [No. 10]

When we listen to traditional storytelling or poetry recitation, we are affected by the interplay of the sound, the word meanings, and their patterns; these are inseparable in a subtle way we seldom notice. One of the times we think about the interplay is when features of a story or poem lose their dynamic quality through the process of translation. Those of us who know two languages well often sense the diminished impact when we listen to a translation from one language to the other. We may recognize that the combination of elements that made a listening experience appealing in the original language has now shifted. The translator, who has been unable to provide everything, may have emphasized one aspect of language over others. Thus, sound may eclipse meaning, or, concentration upon informa¬tional aspects of language may leave little or no room for attention to speech patterns.

The problem of translation is especially acute in the case of Scripture. For many years biblical translators were influenced by reader-intensive societies and Western biblical scholarship that concentrated on the written text. The fundamental needs of predominantly oral societies were often downplayed. Inadequate attention was given to the interplay between the functions of the Bible as a written text and its oral rendition in public worship, study groups, and family settings. Today we need only think of how many people listen to the Bible from audio cassettes or the radio to recognize that the Bible is used orally all around the world.

Contemporary New Testament scholarship has incorporated various methodologies of literary criticism informed by secular disciplines, including giving attention to orality. That orality should seem to be a recent emphasis is ironic since it is an ancient reality. Though limited literacy existed during the periods when the biblical texts emerged, the context was primarily oral and all reading was vocalized, whether for oneself or for others.

Walter Ong has provided descriptions that help readers imagine the mind-set, forms of thought, and communication systems of predominantly oral cultures. He points out that in a fully oral society all communication is vocal, involving sound produced at a given moment in time; beyond that moment, it is possible to know only what can be repeated or recalled. Even a society with limited written material is bound by somewhat the same restrictions.

In a primary oral culture, to solve effectively the problem of retaining and retrieving carefully articulated thought, you have to do your thinking in mnemonic patterns, shaped for ready oral recurrence. Your thought must come into being in heavily rhyth¬mic, balanced patterns, in repetitions or antitheses, in alliterations and assonances, in epithetic and other formulary expressions, in standard thematic settings . . . , in proverbs which are constantly heard by everyone so that they come to mind readily and which themselves are patterned for retention and ready recall, or in other mnemonic form. Serious thought is intertwined with memory systems.

It should come as no surprise for us to discover that, in an oral culture, a speaker (or writer) has organized material into a structure that would be easily remembered. Today both hearer and interpreter profit from the clarity such a structure has provided. Patterned repetition of words and ideas has been particularly noted as a feature of biblical literature in modern scholarship.2 This has provided new clues, particularly since orally-based literature may confuse the modern reader-interpreter by its lack of linear argument.

This study offers an analysis of a short written text, 1 Peter, that we can assume was read aloud to listeners who were accustomed to hearing devices that assisted memory and appreciation. It is time for today’s translators to experiment with what can be done to translate the text of 1 Peter with attention to its form as well as its content—to recover some of its oral features both for the listener and for the reader. In so doing, we will discover that exploring structure and sound assists in discovering the main ideas of the letter, as well. 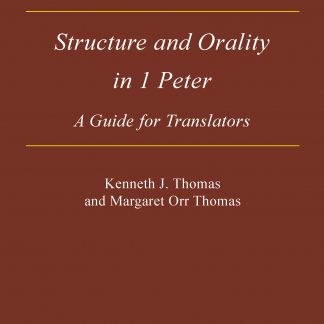