Souls under the Altar: Relevance Theory and the Discourse Structure of Revelation [No. 9]

The structure of John’s Apocalypse, perhaps because it protrudes tan-talizingly to the surface of the text, has been analyzed so frequently and with such varying results that another attempt requires a degree of justi-fication. This present study arose for two reasons. First was my need, during my doctoral research into the role of the people of God in the Apocalypse, for a robust analysis of the structure of the book which would not only lead me to the passages where the people of God were focused, but also fit these passages into the framework of the book as a whole. The second reason, the one that more specifically justifies this study, was a dissatisfaction with the methodology behind previous attempts at ana-lyzing the structure.

The structure of the Apocalypse is tantalizing because although there are many obvious indications that there is a structure (indications such as the numbered series of sevens, or the repeated introductory phrases), when examined more closely, the regularities tend to become more ragged around the edges, and a host of difficulties emerge concerning the large-scale structure surface. Commentators generally offer some kind of analysis, but mostly these are guided either by the overt structuring formulas only, or by some rather theological presuppositions about the ordering of events in the last days. Only a few have relied on the tech-niques of linguistic discourse analysis, attempting to discover the semantic and syntactic patterning that lies both on and below the surface of the text. Yet even these are to some degree or other unsatisfying because they underplay the pragmatic dimensions of the text as it communicates within its late first century A.D. context.

Relevance Theory is an approach to understanding the way in which human beings communicate which has certain significant strengths. It accounts for the large amount of information which is not represented on the surface of the text, that is, information which is inferred from hearing or reading the text in a particular context. And thus it pays close attention to context—what sort of context influences our understanding of a communication, how much context is necessary, and how we discriminate between competing contexts within which to understand a text. Relevance Theory has implications for the structure as well as the informa¬tion content of a text, and when this dimension is taken into account, it significantly strengthens our confidence in the resulting structural analysis. Relevance Theory does not replace or render unnecessary the other techniques by which discourse analysts have examined the structure of a text. Rather, it provides a sharper criterion for their use. 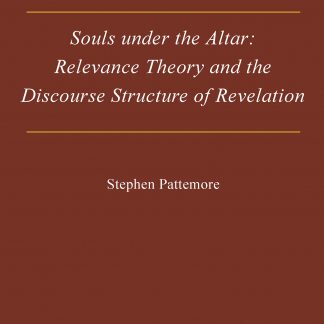 You're viewing: Souls under the Altar: Relevance Theory and the Discourse Structure of Revelation [No. 9] $25.00 – $30.00
Select options